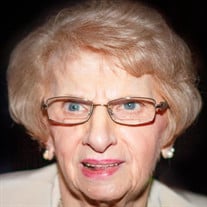 Antoinette “Toni” Spadafore, 98, passed away February 8, 2021. A lifelong resident of Syracuse, she was the fifth of six children born to Dominick and Antonia (Farsaci) Amato. She is preceded in death by her parents; her beloved oldest daughter, Helene Cerrone; her husband of nearly 60 years, Joseph V. Spadafore; her two brothers, Joseph Amato, and Samuel Amato; and her three sisters, Margaret Lee, Ann Kohler, and Catherine Lamacchia. Antoinette is survived by her son, Joseph A. (Rosemary) Spadafore, and two daughters, Constance (Dr. Lawrence) Semel and Annemarie (Richard) Mosley. She also leaves behind 13 grandchildren: Nicole (Frederick) Mason, Kimberly (John) Zeleznik, Dr. Marcus (Josephine) Semel, Dr. Mara (Adam) Kenger, Joel Semel, Anastasia Semel, Lauren (James) Steadman, Joseph J. (Amy) Spadafore, Olivia Spadafore, Samuel Spadafore, Richard Joseph “RJ” (Alyssa) Mosley, Meredith Mosley, and Marissa Mosley. She was blessed with 16 great-grandchildren: Mollie Mason, Matthew Mason, Natalie Zeleznik, Cooper Zeleznik, Noah Semel, Helene Semel, Elleanor Semel, Madeleine Kenger, Margot Kenger, Eloise Kenger, Joseph W. Spadafore, Luciana Spadafore, James Joseph Steadman, Dominic Steadman, Jack Mosley, and Claire Mosley. Toni was a bright, shining light of love for all who knew her. She was raised in a home that taught her to value family above all else, and she passed this on to her children and grandchildren. She hosted Sunday family dinners at her house every week for many years, gathering all of her children and grandchildren together for Italian food, coffee, cousin playtime and lots of laughter. Often friends and other relatives would drop in as well, and birthday and holiday celebrations were frequent occurrences. As the last surviving Amato sibling, she sought to foster and maintain the close-knit nature of her large extended family by keeping in close contact with all of her nieces, nephews, and cousins; and despite having more than a dozen grandchildren, she had an intensely personal, unique, and strong relationship with each and every one of them. Incredibly, she maintained friendships that were more than 95 years old. A devout Catholic, she was a communicant of St. John the Baptist Church. She graduated from North High School of Syracuse. While raising her four children, she helped her husband run his business, Spadafore Electric Company, serving as his administrative assistant. She was active in community organizations that were important to her, including the Auxiliary of St. Joseph’s Hospital Health and the Convent School Mothers’ Club. She was a proud lifetime member of the Lamplighters Dance Club, where she spent many evenings ballroom dancing with her husband. Toni and Joe’s marriage was a true partnership of love, intimacy, and devotion. Whether they were at home cheering on her beloved Yankees and Syracuse University teams, lighting up the dance floor, or attending a grandchild’s activity or sports game, the love they shared for each other was evident in everything they did and was an inspiration to all who knew them. Toni was loving, loyal, patient, and gracious. She treated everyone she met with compassion and kindness. She had a unique capability to see the good in people and bring out the best in everyone. These are the values that her family will seek to carry forward in honor of her incredible legacy. Private funeral services are entrusted to THOMAS J. PIRRO JR. FUNERAL HOME. She will be laid to rest next to her husband in Assumption Cemetery. In lieu of flowers, contributions in her memory may be made to Francis House, 108 Michaels Ave., Syracuse, NY 13208.

Antoinette &#8220;Toni&#8221; Spadafore, 98, passed away February 8, 2021. A lifelong resident of Syracuse, she was the fifth of six children born to Dominick and Antonia (Farsaci) Amato. She is preceded in death by her parents; her beloved... View Obituary & Service Information

Send flowers to the Spadafore family.