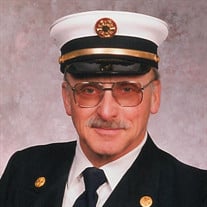 Bruce S. Churchill, 85, of East Syracuse, passed away peacefully on September 22, 2020 at Loretto. Born to the late Kenneth and Leah Mae (Squire) Churchill, Bruce was a veteran of the United States Coast Guard. He spent his career as a master electrician with IBEW Local 43. He was a volunteer fireman and former chief with the East Syracuse Volunteer Fire Department for over 30 years. He was also a long-time volunteer for St Mathews Church, Habitat for Humanity, Red Cross, and Meals on Wheels. Bruce was that rare man who could fix or build anything. From carpentry, masonry, roofing, plumbing, drywall – he was copious in his knowledge and generous with his skills. He could fix anything from cars to appliances and anything mechanical. He leaves a legacy of his handiwork from major construction projects like the Carrier Dome and Carousel Mall to renovations and remodeling projects in every family and friend’s home. The specialized skills and attention to detail that made Bruce so accomplished with his hands also served him well during his more than 30 years with the ESFD. He was always prepared for that call for help. His truck was always backed into the driveway for fast response. His boots and beeper were next to the bed. His first aid kit was nearby. He took great pride in training future generations of firefighters how to drive those big trucks and survived teaching many grandchildren how to parallel park. Bruce was a helping hand to many people over the course of his life. When asked how and why he did all that he did, his stock answer was “it’s just common sense”. He will be dearly missed. Bruce is survived by two sons, Kenneth J. Churchill, Sr., and Bruce T. (Deborah) Churchill; two daughters, Carmalee A. (Donald) Blok, and Hillary C. (Jeffrey) Shaw; numerous grandchildren and great-grandchildren; a sister, Nancy M. Churchill; along with several nieces, nephews, and cousins. He was predeceased by his loving wife of 59 years, Barbara in 2015. In keeping with Bruce’s wishes, funeral services will be private. Bruce will be laid to rest at Woodlawn Cemetery, Syracuse. Funeral arrangements entrusted to THOMAS J. PIRRO JR. FUNERAL HOME. Bruce’s family would like to extend a special thanks to the staff of Loretto 13th floor for their compassionate care during his stay. In lieu of flowers, contributions may be made to the East Syracuse Volunteer Fire Department, 204 North Center St. East Syracuse, NY 13057.

Bruce S. Churchill, 85, of East Syracuse, passed away peacefully on September 22, 2020 at Loretto. Born to the late Kenneth and Leah Mae (Squire) Churchill, Bruce was a veteran of the United States Coast Guard. He spent his career as a master... View Obituary & Service Information

The family of Bruce S. Churchill created this Life Tributes page to make it easy to share your memories.

Send flowers to the Churchill family.