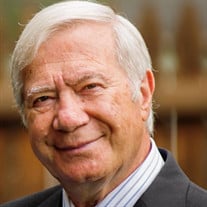 In the presence of his beloved wife and three children, Carmine A. “Tony” Romano passed away peacefully in the very early hours of his eighty-third birthday on Monday, October 18, 2021. Some believe that dying on your birthday has great meaning, that it is considered special and perfect, and that life is a mission given to you by God that begins and ends on your birthday. Dying on his birthday therefore indicates that Tony has completed his God-given earthly mission. Tony was born in Paternopoli, Italy. At the urging of his mother at a young age, Tony began the process of learning everything he needed to know to become a Master Tailor. He attended fashion school in Naples, Italy and opened his own tailor shop in Paternopoli soon after. On July 19, 1965, Tony married Filomena LoVuolo in Paternopoli just outside of Naples. The union of these two wonderful people would endure for the next fifty-six years. In 1965, Tony came to America with $67 in his pocket, landing first in New Jersey only to later connect with family in the Syracuse, NY area. Filomena soon joined him and together they raised a family in Liverpool, NY. Tony’s career as Master Tailor spanned the better part of six decades. He was a custom tailor and retail manager at Homick’s in Auburn, NY for almost thirty years. Tony then worked at Charney’s in the Carousel Mall until his retirement in 2003. Tony’s clientele stayed with him in retirement as he continued to share his skills and talents out of his self-made shop in his home. He was truly an artist as he was very well-known for recreating coats, dresses, suits, and wedding gowns. Tony loved God and he was as proud of his American citizenship as he was of his Italian heritage. And he loved watching soccer and SU basketball and football. But more than anything, Tony loved his family. He was happiest when he was able to share good food and wine with his family and closest friends. His laugh, his stories, his jokes will surely be missed by all who knew him and whose lives were touched by such a wonderful man. Tony was predeceased by his mother Palmina Romano and his mentor and friend, Luigi Delao. Tony is survived by his beloved wife of fifty-six years, Filomena LoVuolo Romano, his daughter Mina Leahey and her husband Chris, son Anthony Romano and his wife Connie, and daughter Lisa Ward and her husband Ray. Tony is also survived by his loving grandchildren, Christopher, Jonathan, Mariah, Nicholas, Michael, and Hudson. Tony is also survived by several nieces and nephews and their parents. A funeral mass in celebration of Tony’s life will be held on Saturday, October 23, 2021, at 9:30 am in Immaculate Heart of Mary Church 425 Beechwood Ave. Liverpool, NY 13088. Entombment will follow in Our Lady of Peace Cemetery Mausoleum, Baldwinsville. Family and friends may call on Friday, October 22, 2021, from 4:00 – 6:00 pm at the THOMAS J. PIRRO JR. FUNERAL HOME 3401 Vickery Rd. (Corner of Buckley Rd.) N. Syracuse, NY 13212. The Romano family would like to extend heartfelt thanks to the doctors and nurses who cared for Tony in his final days. The family has requested that donations in Tony’s name be made to his favorite charity, St. Jude Children’s Research Hospital, 262 Danny Thomas Place, Memphis, TN 38105.

In the presence of his beloved wife and three children, Carmine A. &#8220;Tony&#8221; Romano passed away peacefully in the very early hours of his eighty-third birthday on Monday, October 18, 2021. Some believe that dying on your birthday has... View Obituary & Service Information

The family of Carmine A. "Tony" Romano created this Life Tributes page to make it easy to share your memories.

In the presence of his beloved wife and three children, Carmine...

Send flowers to the Romano family.