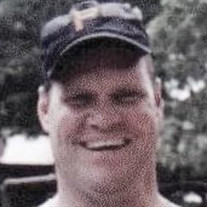 Charles D. “Chuck” Rogers passed away unexpectedly on April 19, 2022.  A devoted, loving, and proud father, Chuck leaves behind his daughter, Elizabeth “Liz” Rogers and son, Charles D. “David” Rogers.. Chuck grew up in Monroeville, PA, was an active band member, 1981 graduate of Gateway Senior High School and later studied at Edinboro University of PA as well as SUNY Institute of Technology – Utica earning degrees in BioMed and Electrical Engineering. In 1988, Chuck began a fulfilling, lifelong career he was very passionate about in Clinical Engineering at Upstate University Hospital in Syracuse, NY, where he also later retired in March of 2022. Chuck was very devoted to his family, the life-long friends he grew up with in Monroeville, and always made new friends wherever he went. A lifetime fan of the Pittsburgh Steelers, Chuck’s kids and family would tell you that he no doubt held the record with his extensive Steelers souvenir collection. As a loving dad, committed to Liz and David, he coached Pop Warner football for several years, and was the ultimate “Cheer Dad”, never missing a cheer competition. Chuck will also be remembered for being active in lending his vast constructive skills to building sets for local high school plays. There was no mistaking the unconditional acceptance and his skill for building camaraderie among the friends and family he treasured spending time with. Chuck’s incredible sense of humor and passion for wanting everyone to be happy are among the many qualities that will be greatly missed. Chuck was the beloved son of Jane M. Rogers and the late, Charles D. Rogers, Sr., loving brother to sisters, Lynne (John) Downs, Kathleen (Scott) Schawalder, Elizabeth (Jason) Trautman and Patricia Sharp and he leaves behind treasured nieces and nephews, Claire Schawalder, Katelyn and Megan Sharp, Jake, and Josh Trautman. Chuck also leaves behind his very special lady friend, Michelle Chapman-Gugliuzza. Calling hours will be held on Monday, April 25, 2022, from 4:00 – 6:30 pm, immediately followed by a Funeral Service in celebration of Chuck’s life at the THOMAS J. PIRRO JR. FUNERAL HOME, 3401 Vickery Rd. (corner of Buckley Rd.) North Syracuse, NY. Burial will be at a later date in Pittsburgh, PA. In lieu of flowers, the family requests either monetary or wish list donations be made to Helping Hounds Dog Rescue, 7268 Caswell Street, N. Syracuse, NY 13212.

The family of Charles D. Rogers Jr. created this Life Tributes page to make it easy to share your memories.