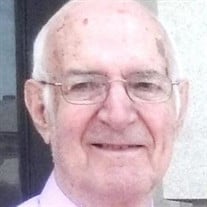 Christopher J. Russo, Sr., a cherished husband, father, grandfather, and brother, passed away on July 28, 2021. He was born in Mattydale, N.Y. in 1929. Chris was the beloved husband of Arline (DeSimone) for more than 70 years, father of Christopher Russo, Jr. (Mary Ellen), Barbara Russo, and Karen Russo, and grandfather of Paige Smith and William O’Connell. He was also one of eight rambunctious children, predeceased by Tony Russo, Victoria Dallessandro, Joseph Russo, Vince Russo, Victor Russo and survived by Elizabeth Malloro, Paul Russo (Kitty), Darlene Russo and Joseph Honis. Chris will be remembered as the first person to stand up to join you for a walk, lend a hand, or offer a joke when you needed a smile—a fact to which his many devoted friends and family members can attest. Growing up in a large Italian American family shaped Chris for the rest of his life. It was where he learned the values of generosity, loyalty, and faith, and where his life-long love for a good bowl of pasta took hold. He was proud to have seen the world, traveling first to Alabama in the early 1950s when serving with the U.S. Army during the Korean War, and later, with his children to reconnect with his relatives in Italy. His family also fondly remembers the rambling cross-country jaunts to national parks, beaches, and other wonders. Chris saw all three of his devoted children graduate from college—a dream of his, and one he strived so hard to ensure would come true. He managed the Onondaga Oil Co. and was integral to its growth for many years. And Chris really knew how to have fun. He never stopped rooting for Syracuse University’s basketball teams, an allegiance developed during his attendance of the college. He adored being outside, where he would go golfing with his brother Vince, and loved bowling a perfect game with his friends in Liverpool. He was also a trivia whiz. From Lauren Bacall to current politics, Chris would astound you with his knowledge of the world at large. More recently, he was a member of the Town of Liverpool Chorus, where he’d participate in the annual holiday concerts. His voice was smooth and beautiful. He also belonged to the Salina Senior Civic Center and the North Syracuse Senior Group. His many friends will miss his quick smile and gentle nature. While his family and friends would have loved just one more drive to Skaneateles to sit near the lake with Chris, he died peacefully on July 28th. A Funeral Mass in celebration of Christopher’s life will be held at 11:00 am on Monday, August 2, 2021 at St. Margaret’s Church, Mattydale. Internment with Military Honors will follow at Our Lady of Peace Cemetery, Baldwinsville, NY. Family and friends may call from 3:00 – 5:00 pm on Sunday, August 1, 2021 at the THOMAS J. PIRRO JR. FUNERAL HOME, 3401 Vickery Rd. (corner of Buckley Rd.) North Syracuse, NY.

Christopher J. Russo, Sr., a cherished husband, father, grandfather, and brother, passed away on July 28, 2021. He was born in Mattydale, N.Y. in 1929. Chris was the beloved husband of Arline (DeSimone) for more than 70 years, father of Christopher... View Obituary & Service Information

The family of Christopher J. Russo, Sr. created this Life Tributes page to make it easy to share your memories.