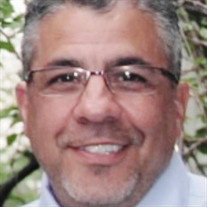 Daniel J. “Danny” Cavallo, 57, of East Syracuse, passed away unexpectedly on January 2, 2021 at St. Joseph’s Hospital. He was born in Syracuse and graduated from Assumption Catholic Academy. Danny was employed by Wegmans Food Markets for over 40 years, the majority of which as a Master Carpenter. He had a passion for carpentry, doing a variety of remodeling projects for many others throughout the years. Anyone he did work for knew he was meticulous and a master at his craft. Danny also started coaching baseball early on, but after having two daughters he moved onto coaching softball and was able to coach both his daughters from little league through their high school years. He also coached for many different leagues, softball travel teams and was the varsity softball coach at Bishop Grimes High School. He currently was involved with NY District 8 Little League as a Director alongside his father. Danny also enjoyed the outdoors and was an avid hunter, but what he cherished most in life was spending time with his family. “His girls” were the light of his life. All who knew Danny loved his quick wit and larger than life personality. His big, beautiful smile was contagious and will live in our hearts always and forever. Danny is survived by his loving wife of 24 years, Maureen (Anderson) Cavallo; two daughters, Nichole and Alyssa Cavallo; his parents, Daniel and Patricia Cavallo; two sisters, Jennifer (Michael) Ferguson and Danice (Christopher) Magill; two nephews, one niece, and several cousins. A Funeral Mass in celebration of Danny’s life will be held at 10:00 am on Saturday, January 9, 2021 at Assumption Church, 812 N. Salina St., Syracuse, NY. Entombment will follow at Woodlawn Cemetery Mausoleum. Family and friends may call from 4:00 – 7:00 pm on Friday, January 8, 2021 at the THOMAS J. PIRRO JR. FUNERAL HOME, 3401 Vickery Rd. (corner of Buckley Rd.) North Syracuse, NY. In lieu of flowers, donations may be made to NY District 8 Little League Foundation at 201 Norwood Ave., Syracuse, NY 13206 or a favorite charity of choice.

The family of Daniel J. "Danny" Cavallo created this Life Tributes page to make it easy to share your memories.

Send flowers to the Cavallo family.