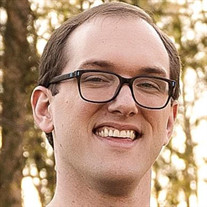 Daniel Michael Minahan, 32, of Liverpool, passed away April 23, 2022. He was born in Syracuse and graduated from Cicero-North Syracuse High School in 2008 and received his bachelor&#8217;s degree from Cornell University in 2012. Daniel was employed... View Obituary & Service Information

The family of Daniel Michael Minahan created this Life Tributes page to make it easy to share your memories.

Send flowers to the Minahan family.