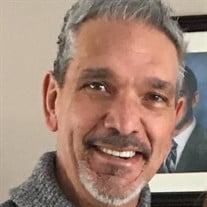 It is with heavy hearts and great sadness to announce Dean “Dino” Pappas, 57, of Liverpool, passed away peacefully at home surrounded by his loving family on August 15, 2021. He was born in Syracuse, son of the late Symeon P. and Vasiliki “Vicky” (Christou) Pappas. Dino was the owner and operator for nearly 30 dedicated years of Pappas Bakery in Liverpool. He was an athletic sportsman and a passionate hunter; spending time in the woods with his son, family, and close friends was what brought him the most joy and made him happiest. Dino was most proud of his role as a father and was blessed with two beautiful children; Sammy and Selena were the brightest lights of his life and his most valued pride and joy. He was always their superhero, and his most precious time was when he was with his wife and children. Dino’s presence lit up a room and his energy was felt by everyone. He always had a story to tell which always ended in laughter and hugs. His ability to befriend a stranger and make a lifelong friend came naturally for him. Dino will always be remembered for his authentic way of always making any person feel as though they were the most important to him. He is survived by his wife of 28 years, Helen (Panopoulos) Pappas; his son, Sammy Pappas; his daughter, Selena Pappas; two sisters, Helen (Robert) Pappas-Bonilla and Christine (Z) Klapan; two special nieces, Crystal (Tyler) Swanson and Alexia Klapan; his special great niece and nephew, Sophia and Jacob Swanson, as well as his special close family in Canada. Visitation will be held on Thursday, August 19, 2021 from 9:30am - 12:30pm at the THOMAS J. PIRRO JR. FUNERAL HOME, 3401 Vickery Rd. (corner of Buckley Rd.) North Syracuse, NY, followed by a Funeral Service in celebration of Dean’s life at 1:30 pm at St. Sophia’s Greek Orthodox Church, 325 Waring Rd., Syracuse, NY. He will be laid to rest in Oakwood Cemetery.

It is with heavy hearts and great sadness to announce Dean &#8220;Dino&#8221; Pappas, 57, of Liverpool, passed away peacefully at home surrounded by his loving family on August 15, 2021. He was born in Syracuse, son of the late Symeon P. and... View Obituary & Service Information

The family of Dean "Dino" Pappas created this Life Tributes page to make it easy to share your memories.

It is with heavy hearts and great sadness to announce Dean “Dino”...

Send flowers to the Pappas family.