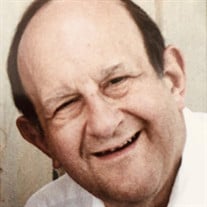 Dimitrio “Jim” Sterio, 82, passed away peacefully on Sunday, August 15, 2021. Jim was born in Syracuse on May 18, 1939, to the late Gregory and Eugenia (Kyrkou) Sterio. He was a graduate of Vocational High School and a veteran of the U.S. Air Force. Jim was the co-owner of Sterio’s Landmark Restaurant from 1974 to 1992 and was the Catering Director at the Sheraton University Hotel from 1992 until his retirement in 1997. Jim’s loves included cooking, watching movies, woodworking, swimming, spending time with his family as well as connecting with his friends from the YMCA. Jim was blessed to receive a liver organ transplant in December 2002. The family would like to express its heartfelt thanks to all the families that donate loved ones’ organs. This selfless act gave Jim 18 more wonderful years to watch his grandchildren grow, build new friendships, and experience a fulfilling life. Jim is predeceased by his loving wife of almost 55 years, Krystyna; his sister, Evangeline Fortino, and brothers: Alexander, Vangel, and Constantino. Jim leaves behind his three loving children, James (Matina) Sterio, David (Kathy) Sterio, and Susan (Michael) Larca; as well as grandchildren, Peter, Krystyna, Nicole, Jacob, Emily, Magdalena, Giovanna, and Demetra who will miss him very much. He is also survived by his sister-in-law, Michelina Sterio; brother-in-law, Alfonso Fortino; and many nieces, nephews, and cousins. A Funeral Service in celebration of Dimitrio’s life will be held at 10:00 am on Friday, August 20, 2021 at St. Sophia’s Greek Orthodox Church, 325 Waring Rd., Syracuse, NY. He will be laid to rest at Woodlawn Cemetery Mausoleum. Family and friends may call from 4:00 – 6:00 pm on Thursday, August 19, 2021 at the THOMAS J. PIRRO JR. FUNERAL HOME, 3401 Vickery Rd. (corner of Buckley Rd.) North Syracuse, NY. In lieu of flowers, donations can be made to St. Sophia’s Greek Orthodox Church, 325 Waring Rd., Syracuse, NY 13224.

The family of Dimitrio "Jim" Sterio created this Life Tributes page to make it easy to share your memories.

Send flowers to the Sterio family.