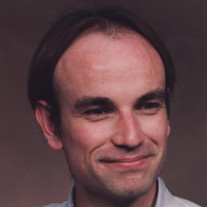 Douglas Andrew Pierce passed away peacefully at home, in his sleep, on May 5, 2021. He will join his father-in-law, John Vasek, for a round of golf, and see his mom, Martha Pierce, once again. But in this world, Doug will be missed by his family, friends, and co-workers. While at Liverpool High School, he was part of the marching band and the swim team. At Binghamton University, as an English major, he met his wife in an English class. After graduation, Doug played guitar and sometimes trombone (although that last one was mostly to scare the cats). He was an artist who also loved to write, and he wrote several manuscripts before his passing. Remember when the newspaper arrived seven days a week, one in the morning and one in the evening? Doug sure did. He worked for 32 years as a mailroom manager for The Post-Standard in Syracuse. If you received your morning paper on time, thank Doug and his hard working crew. Doug was also a student, and an occasional instructor, at CNY Karate and Kobudo Schools. The dojo was one of his favorite places, not just for the lessons, but also for the community! He loved it there, so much, that he asked to be cremated in his best uniform. His wishes were honored. Doug was a 4th degree Black belt. Doug enjoyed camping, the real kind, with a tent in the woods, and his family was right there with him. Doug loved to kayak, go for a run, and spend a lot of time outdoors. His favorite vacation spot was the beach. Doug is survived by Marie Vasek, his wife of 39 years, and his two daughters, Jennifer Wardwell and Margaret Pierce. He is also survived by his father, Ross Pierce, his sister, Pat Zimmermann, and his brothers, Bruce and Ian Pierce. In lieu of flowers, Doug would appreciate a contribution to: the Pancreatic Cancer Action Network, Hospice of CNY, or the St. Joseph’s Health Foundation. And If you would like to honor Doug’s memory in your daily life, try one (or more) of the following: - Have a beer - Have a beer on the beach (advanced) - Try some new food - Sit in nature and sketch - Refuse to buy a new snowblower for 20 years - Take Swing dance lessons - Go for a run - Pretend you don’t like cats (but secretly you do) - Write a story - Draw caricatures - Wear a silly hat - Wear something that isn’t really a hat as a hat (advanced) - Try some expensive scotch or some really cheap wine - Make silly faces in as many photos as possible - Go to Italy (he always wanted to) - Make up names for flowers Dad liked to have fun, so even if you didn’t know him, join in! Have a beer. Tell them Doug sent you. Family and friends may call on Monday, May 10, 2021 from 4 to 6 p.m. immediately followed by a funeral service at 6 p.m. at the THOMAS J. PIRRO JR. FUNERAL HOME, 3401 Vickery Road (corner of Buckley Road) in North Syracuse. To attend the service remotely on Monday at 6 p.m., please use the link on Doug’s tribute page at tjpfuneralhome.com.

Douglas Andrew Pierce passed away peacefully at home, in his sleep, on May 5, 2021. He will join his father-in-law, John Vasek, for a round of golf, and see his mom, Martha Pierce, once again. But in this world, Doug will be missed by his family,... View Obituary & Service Information

Douglas Andrew Pierce passed away peacefully at home, in his...

Send flowers to the Pierce family.