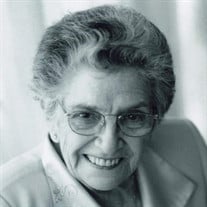 Eleanor Edith Canino, 96, went home to be with the Lord in heaven on March 26, 2021. She was born in Syracuse on October 15, 1924 to the late Dominic and Teresa Davoli. She retired from the Syracuse City School District as a secretary at T. Aaron Levy Middle School. She was a communicant of St. Peter’s Italian Church where she served as a lector. She was predeceased by her husband of 48 years, Frank L Canino; five sisters, Josephine (Italo) Franconeri, Genevieve (John) Begay, Carmella (James) Gentile, Judith (Santo) Russo, and Viola (Sam) Coniglio; two brothers, Anthony (Mary) Davoli and Raymond J. Davoli. Eleanor is survived by her three children, Diane (Jerry) Canino-Rispoli, Denise (Chris) Canino- Williams, and Frank (Sharon) Canino; five grandchildren, Geoffrey (Laura Massa) Rispoli, Lauren (Tim) Rispoli-Cox, Christina (Strater) Canino-Brown, Frank Canino (Lauren King), and Jessica Canino, three great grandchildren, Siena and Caia Brown, and Peyton Eleanor Cox. She is also survived by sisters-in-law, Fortunata Canino and Jean Coniglio, along with several nieces and nephews. In her youth, Eleanor was active in the Girl Scouts. She enjoyed horseback riding and hanging out with a group of friends that later became known as “The Club”. After graduating from North High School, Eleanor became a secretary for the U.S. Signal Corps during WWII. Many members of “The Club” were called to serve in the military during the war. After the war ended, “The Club” was reunited, and they met continuously for the next 50 years to play poker and pitch for pennies. A Mass of Christian Burial will be held on Friday, April 9, 2021 at 12 PM. at Holy Cross Church, 4112 E Genesee Street, Dewitt, NY 13214. Entombment will take place in St. Mary’s Mausoleum, DeWitt, NY. Family and friends may call from 11:00 AM - 11:45 AM at Holy Cross Church prior to the beginning of mass. In Lieu of flowers, contributions may be made to the Alzheimer’s Association, Central New York Chapter; 441 W. Kirkpatrick St. Syracuse, NY 13204 or Dravet Syndrome Foundation Inc. Po Box 3026 Cherry Hill, NJ 08034.

Eleanor Edith Canino, 96, went home to be with the Lord in heaven on March 26, 2021. She was born in Syracuse on October 15, 1924 to the late Dominic and Teresa Davoli. She retired from the Syracuse City School District as a secretary at T.... View Obituary & Service Information

The family of Eleanor Edith Canino created this Life Tributes page to make it easy to share your memories.

Eleanor Edith Canino, 96, went home to be with the Lord in heaven...

Send flowers to the Canino family.