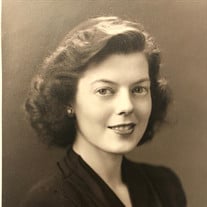 Eleanor S. Jones, 99, of North Syracuse passed away on Thursday, December 16 at Crouse Hospital with a family member by her side. One of nine children, she was born on the family farm in the Town of Colchester, Delaware County to Ward and Mattie (Cable) Suttle. She was predeceased by her older brothers: George, James, Floyd, Stanley and Francis Suttle, as well as two younger sisters, Inez Pillsbury and Marjorie MacDonald. She is survived by her three daughters: Marinda Jones, Barbara Jones, and Christine (Stephen) Marascalchi; her two grandchildren, Peter Marascalchi and Caitlin (Cory) Wohlheuter and two great-granddaughters, Aubrey and Hailey; her younger sister, Irma Rahr, several nieces and nephews. Graduating from Sidney High School at the age of 14, she spent the next year working and taking post-graduate classes. It was decided she was too young to enter college so she went to live with her aunt in New York City where she attended the Brooklyn Friends School. She went on to graduate from Barnard College with a major in mathematics and a minor in both psychology and physics. Following graduation, she was hired by General Electric in Schenectady, N.Y. due to her excellent math skills to work with a group of predominantly male engineers in supporting the war efforts. That is where she met and married the man who became her husband of over 42 years, William L. Jones, Jr. (deceased.) She then worked in social services for several years while attending graduate school. Eleanor was a member of Andrews Memorial United Methodist Church and, more recently, Faith Journey UMC for over 67 years. She was active in many aspects of the church and was their first woman trustee. Her involvement in the United Methodist Church extended to the conference, state, and national levels including the Central New York Conference Council, Older Native American Outreach Program, United Ministries in Higher Education, and the Brown Memorial/Westside Ministries. Eleanor dedicated herself to raising her family and supporting her community through volunteer service. Considered a “professional volunteer” by her family, she gave not only her time and energy but vision and, in many instances, leadership to a variety of causes. She was a Red Cross volunteer for over 45 years primarily with the blood program as Onondaga County Chair of Volunteers, the Regional Blood Program Executive Committee, and Chapter Board of Directors. She also contributed years of service to the Alzheimer’s Association of CNY as a founding member and member of the Board of Directors, Corinthian Foundation Life Member and Board of Directors, Metropolitan Commission on Aging, New York State Office for Aging, North Syracuse Central School District Board of Education, Pitcher Hill Housing Corporation Board of Directors and United Nations Association of Central New York Board of Directors. In honor of her positive impact, Eleanor received a number of recognitions over the years including being named New York State Commission on Aging “Senior Citizen of the Year” in 1987. In her “spare time”, Eleanor enjoyed played bridge, knitting, reading, watching SU basketball, and riding the family’s horses well into her 70’s. Her strong will and independence allowed her to remain at home and continue her interest in the events and issues of both local and world affairs. Most of all, she cherished the time she spent with her grandchildren – the “lights of her life.” The family would like to extend their thanks to the Syracuse medical community for their dedication and care throughout our mother’s life and, in particular, to Crouse Cardiology for their 30 years of care. Private services will take place at a later date. Interment will be at Paige Cemetery in Downsville, New York. In lieu of flowers, it was Eleanor’s wish that any contributions in her memory be made to American Red Cross Disaster Relief.

Eleanor S. Jones, 99, of North Syracuse passed away on Thursday, December 16 at Crouse Hospital with a family member by her side. One of nine children, she was born on the family farm in the Town of Colchester, Delaware County to Ward and Mattie... View Obituary & Service Information

The family of Eleanor S. Jones created this Life Tributes page to make it easy to share your memories.

Eleanor S. Jones, 99, of North Syracuse passed away on Thursday,...