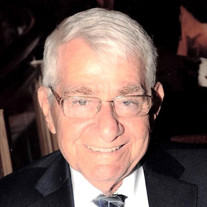 Elia Q. Sousou, 84, of Baldwinsville, NY, fell asleep in the Lord peacefully surrounded by his loving wife and children on Tuesday, March 1, 2022. He was one of ten children born to Qustandi and Jalileh Sousou in Ramleh, Palestine on July 25, 1937. Elia spent his entire childhood working many jobs to help support his family. He emigrated to the United States in 1959 and found his forever home in Syracuse, NY where he raised his family and made many close friendships throughout the years. He became a lifelong member of St. Elias Church where he faithfully served on the Parish Council for many years and spent many years working at the St. Elias Middle Eastern Festival. Elia was so generous that he personally sponsored many family members and friends from his homeland in Palestine to Syracuse where he helped them build their homes and create a future for their families. Elia worked several jobs in Syracuse before he became a self-made entrepreneur and businessman when he bought Ike’s Superette, which he owned for 19 years. Everyone in the community where he owned Ike’s Superette knew him as “Ike” and loved him dearly. He instilled hard work, dedication and perseverance in his children and grandchildren. Elia was a devoted and loving husband, father, and grandfather to his family who adored him so much. He enjoyed his life to the fullest. He and his wife loved to cruise and have sailed on over 30 cruises throughout the years. His last cruise was his family’s most memorable where he took his five children on a 7-night cruise to the Western Caribbean where he danced and played in the casino. He was so loved and well known on that cruise that the entire crew called him “Baba”. Elia loved to have fun so much and loved to see his family smile and laugh that on his last night on this earth, he danced, clapped, and sang for them from his bed, just so he could see them smile for one last time. Elia was an avid NY sports fan with the Yankees and Giants being his favorite teams. Elia is predeceased by his parents, his brothers Hanna and Fawzi, and his sisters Almaza and Samira. Elia is survived by his wife of 55 years, Nuha (Dayeh) Sousou, who he affectionally referred to as “Nunu”. He is also survived by his five children, who called him “Baba” - Irene (Nabil) Allawh, Holly (Andrew) Kane, Joanne (Brian) Craig, Anthony Sousou and Faris (Lisa) Sousou. He has ten loving grandchildren who refer to him as “Sedo or Seeds” - Rina, Tanya, Thomas, Matthew, Alexander, Alaina, Madalyne, Anthony, Jacob and Emilie. They were his pride and joy. Elia is also survived by his siblings Bishara Sousou, Siham Ayoub, Suad Sousou, Nuha Zraik, Vicky Shehadeh and many brother & sister in laws, nieces, nephews and friends who loved him. Calling hours will be held on Saturday, March 5, 2022, from 10AM to 12PM, with a funeral service to follow at 12PM at St. Elias Antiochian Orthodox Church, 4988 Onondaga Rd., Syracuse, NY. He will be laid to rest in Oakwood Cemetery. In lieu of flowers, the family is requesting that donations be made to the St. Elias Antiochian Orthodox Church Building Fund, 4988 Onondaga Road, Syracuse NY 13215.

Elia Q. Sousou, 84, of Baldwinsville, NY, fell asleep in the Lord peacefully surrounded by his loving wife and children on Tuesday, March 1, 2022. He was one of ten children born to Qustandi and Jalileh Sousou in Ramleh, Palestine on July 25,... View Obituary & Service Information

The family of Elia Q. Sousou created this Life Tributes page to make it easy to share your memories.

Send flowers to the Sousou family.