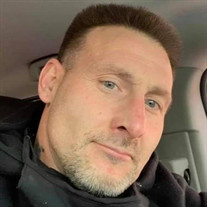 On March 5, 2021, Frank Joseph Brown “Frankie” of Syracuse, NY passed away unexpectedly at the young age of 45. Frank attended Weedsport High School and Cayuga Community College in Auburn, NY. Frank was an avid Philadelphia Eagles fan who loved the game of football since he was a young boy, playing in high school and college. He was a talented craftsman and builder who was skilled in many fields including HVAC, roofing, and overall construction “Frank could build anything from the ground up”. Frank was an adoring father to his daughter, Hannah, and very proud of all her accomplishments, speaking of her often and bragging to anyone that would listen about his “peanut”. Frank’s charisma and passion are well described in a post that a teammate and longtime friend shared on Facebook recently: “Frank Brown #93 was one of the pioneer players for our inaugural season(s) at CCC and he set the edge (DE) on a National ranked Juco defense. Undersized but never outmatched, he played with the heart of a lion and brought that ruckus on every snap. Everyone who played with him, loved him. Everyone who hung out with him, loved him even more. A larger-than-life persona and free spirit, his energy and aura will never be forgotten or mistaken. He truly was one of a kind". Frank was predeceased by his father, Herbert Lee Brown in 2005, his brother, Wade Allen Brown in 2009; maternal grandfather, Elmer Shiko in 2009 and maternal grandmother, Frances Shiko in 2012. Frank is survived by his daughters, Megan Labranche of Cato and Hannah Brown of Liverpool; his mother, Rose Mary Brown (Shiko) of Liverpool; brother, Jamie Simms of OH; two sisters, Adrianne (Cissy) DiBello (Simms) of MD and LeeAnne Orbison (Brown) of KY; several aunts, uncles, nieces, nephews, cousins and countless lifelong friends that were truly family to him. Calling hours will be held on Saturday, April 17, 2021 from 12 to 1:30 p.m. immediately followed by a memorial service at 1:30 in celebration of Frank’s life at the THOMAS J. PIRRO JR. FUNERAL HOME, 3401 Vickery Road (Corner of Buckley Road) in North Syracuse. All are invited to a post service reception at Sharkey’s Bar & Grill, 7240 Oswego Rd. in Liverpool from 2:30-4:30 p.m. Please join the family and friends as we remember Frank’s life together.

Send flowers to the Brown family.