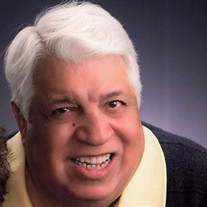 Frank D. Impelizzieri, 88, of Lyncourt, passed away on Sunday, March 14, 2021 surrounded by his loving family. Frank was born in Syracuse on August 4, 1932 to the late Charles and Rose (Ponto) Impelizzieri. He was a graduate of North High School where he was a four-letter man, playing football, basketball, baseball, and track. Upon graduating, he joined the US Air Force, serving three years in Germany where he worked in radar and played basketball each year, representing the USAF all over Europe. Upon honorable discharge, he attended Le Moyne College and Syracuse University, graduating with a BS in Accounting. He worked for the Federal Government in several departments, retiring from the DOD after 30 years. Frank was an avid sportsman. He coached basketball at Assumption Academy where he loved and bonded with his players. He participated in many sports around the city, including softball at St. Peter’s Holy Name, handball, golf, and bowling, to name a few. Frank was happiest at family gatherings. He is remembered for his deep faith in God, his generosity, sense of humor, big smile, and especially his great love for his family and friends. Along with his parents, Frank was predeceased by his grandson, Dominic Impelizzieri. He is survived by his wife of 62 years, Helen (Malkoske) Impelizzieri; his four children, Charles (Nancy) Impelizzieri, Rosemary, (Leonard) Morgese, Linda Impelizzieri (Robert Alsheimer), and Frank Impelizzieri; six grandchildren; four great-grandchildren; sister, Joanne Nugent; brother, Charles Impelizzieri; along with several nieces, nephews, and extended family. A Funeral Mass in Celebration of Frank’s life will be held at 10:00 AM on Friday, March 19, 2021 in St. Daniel Church, 3004 Court St. Syracuse, NY 13208. Private burial with Military Honors will take place at Assumption Cemetery, Syracuse. Funeral arrangements entrusted to THOMAS J. PIRRO JR. FUNERAL HOME. In lieu of flowers, contributions in Frank’s memory may be made to St. Daniel Church, 3004 Court St. Syracuse, NY 13208.

Frank D. Impelizzieri, 88, of Lyncourt, passed away on Sunday, March 14, 2021 surrounded by his loving family. Frank was born in Syracuse on August 4, 1932 to the late Charles and Rose (Ponto) Impelizzieri. He was a graduate of North High School... View Obituary & Service Information

The family of Frank D. Impelizzieri created this Life Tributes page to make it easy to share your memories.