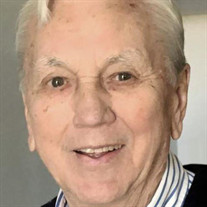 Frank J. Zdep, 95, of Baldwinsville, passed away on November 30, 2021 surrounded by family in his home. He was one of six children to Mary and Stanley Zdep born on January 26,1926. He served as an officer in the U.S. Navy in 1944. He was a Lieutenant in the Syracuse City Fire Department retiring in 1969 after 22 years and is one of the oldest surviving members. He was a gentle, humble and generous father, grandfather, and great-grandfather who instilled many invaluable lessons in all of us. Frank was a devoted husband of 66 wonderful years of marriage to his wife Edie who predeceased him in 2016. Frank and Edie were pioneers in the Tupperware organization. They joined the company in 1953 and became franchise owners of E-Z Distributors Inc. from 1958-1996. Frank, along with his wife Edie, built a beautiful legacy together and inspired the lives of too many to count both in business and out. Frank cared deeply for his family, church, and community. He was honored to receive along with his wife Edie, the Immaculata Award in the church and the Ad Astra Award in business. He encouraged entrepreneurship and helped build business dreams. He contributed to the building of the St. Margaret’s Church, was a long-standing member of the Third Base organization, and supported many other local and national charities. Frank had a strong faith and strong work ethic. His faith shined like the season of Christmas and he will be missed tremendously. Frank was predeceased by his wife Edie; son, Dr. Steven Zdep; four brothers: William, Walter, Edward, and Julian, (Julie sister-in-law). Frank is survived by two daughters, Michelle and Jack Edgerton of Manlius, Cindy and Bob Ulrich of Dana Point, California and daughter-in-law, Judy Zdep of Baldwinsville; grandchildren: Mackenzie and Blaine Vossler, Chelsea Edgerton, Dr. Steven R. and Stacy Zdep, Lisa and Jason Pohlman, Christopher and Meagan Zdep, Kaelyn and Benjamin Leger, Lindsay and Ryan Benson, and Taylor Ulrich; step-grandchildren: Jacki and Michael Goldberg, Kathy and Ossam Manea, Robert Edgerton, Michael and Staci Edgerton, John and Kadi Edgerton, and Christopher and Jennifer Edgerton; his brother, Henry Zdep; brother-in-law, Bill and Sarah Avery along with 18 great-grandchildren, 7 step great-grandchildren and many nieces and nephews. The family so appreciates the beautiful loving care provided by his caregivers: Robin, Mira, Terrilyn and Laurie. They loved father as if their own. Relatives and friends may call on Thursday, December 9, 2021 from 4 to 6 pm at the THOMAS J. PIRRO JR. FUNERAL HOME, 3401 Vickery Rd. (corner of Buckley Rd.) North Syracuse, NY. A funeral mass in celebration of Frank’s life will be held at 10:30 am on Friday, December 10, 2021 at St. Margaret’s Church. Entombment will follow in St. Mary’s Cemetery Mausoleum, DeWitt, NY. Donations may be made to Unity Acres, PO Box 153, Orwell, NY 13426 or to St. Margaret’s Capital Fund, 203 Roxboro Rd., Syracuse, NY 13211.

Frank J. Zdep, 95, of Baldwinsville, passed away on November...

Send flowers to the Zdep family.