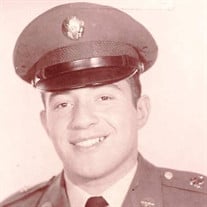 Gelsomino Michael “Jess” Venditti, 74, passed away May 1, 2021. He was born in Syracuse on December 7, 1946, son of the late Michael and Catherine (Brigandi) Venditti. Jess attended St. Brigid’s Elementary School and graduated in 1963 from Solvay High School where he played football. He was drafted into the U.S. Army and served from 1966 – 1969 during the Vietnam Era, and was honorably discharged. Gelsomino was stationed in Fort Bliss, TX, and was involved in bringing the Hawk Missile System to Vietnam; he was also a weightlifter and represented the army in the Olympics. He then joined the Onondaga County Sheriff’s Dept. and retired after 23 years in the jail division at the Onondaga County Public Safety Bldg, as a Captain. In addition to his parents, he is also predeceased by his grandparents, Gelsomino and Maria Mattea Venditti, Gaetano and Maria Brigandi, and several aunts, uncles and cousins. Jess is survived by his sister, Mary Anne Venditti, and many cousins. Deepest thanks to the staff at Upstate Medical during Gelsomino’s final days, the Syracuse VA, Van Duyn Nursing Home and all his friends, especially Ron, Barb and Jim, who in some special way shared his journey with us. Visitation will be held on Thursday, May 6, 2021 from 10 – 11 am, followed by a prayer service at 11:30 am at the THOMAS J. PIRRO JR. FUNERAL HOME, 3401 Vickery Rd. (corner of Buckley Rd.) North Syracuse, NY, with a Funeral Mass and Military Honors in celebration of Gelsomino’s life at 12:30 pm in Holy Family Church, 127 Chapel Dr., Syracuse, NY. Private burial will take place at the Onondaga County Veterans Cemetery. In lieu of flowers, donations may be made to Multiple Sclerosis Foundation National Headquarters 6520 N. Andrews Ave Fort Lauderdale, FL 33309-2132.

The family of Gelsomino Michael "Jess" Venditti created this Life Tributes page to make it easy to share your memories.

Send flowers to the Venditti family.