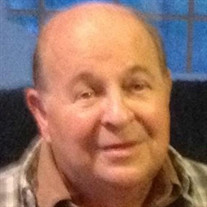 George William Ehegartner, 79, of Brewerton, passed away peacefully at his home on Friday, August 27, 2021 surrounded by his loving family. He was born in Syracuse on March 2, 1942 to the late William J. and Norma (Eppler) Ehegartner and graduated from North High School. Upon graduating high school in 1959, George began a career with General Accident Insurance and joined the United States Army Reserve in 1963, being honorably discharged as a Staff Sergeant in 1969. In 1965 he married the former Catherine Ruggireo and over the next couple decades, he cofounded several insurance related corporations including The Oak Agency in 1973. In 1981, George cofounded Infitec, Inc., specializing in electronics control design and manufacturing, headquartered in East Syracuse. George enjoyed the outdoors, he would often be out hunting, fishing, golfing, or tending to his yard. He was also known for his infamous trips to the casino. George was a 36+ year member of American Legion Post 0787, a member of The Vagabonds, and an avid Syracuse sports fan. Besides his parents, George is predeceased by his wife of 42 years, Catherine (Ruggireo) Ehegartner; a brother, William J. Ehegartner and a sister Judith Mary Anderson. He is survived by his son, George W. (Melissa) Ehegartner, Jr.; a daughter, Kimberly Ann Bremerman; a grandson, Nicholas W. Bremerman; a granddaughter, Valerie Ehegartner; his sister, Janice “Jame” Schaefer, PhD; along with several nieces and nephews. Calling hours will be held on Tuesday, August 31, 2021 from 4 – 7 pm at the THOMAS J. PIRRO JR. FUNERAL HOME, 3401 Vickery Rd. (corner of Buckley Rd.) North Syracuse. A funeral service in celebration of George’s life will be held at 11 am on Wednesday, September 1, 2021 at the funeral home. To attend the service remotely, please visit George's tribute page at 11am on Wednesday. Entombment will follow in Woodlawn Mausoleum, Syracuse. Contributions in lieu of flowers may be made to a charity of one’s choice.

George William Ehegartner, 79, of Brewerton, passed away peacefully at his home on Friday, August 27, 2021 surrounded by his loving family. He was born in Syracuse on March 2, 1942 to the late William J. and Norma (Eppler) Ehegartner and graduated... View Obituary & Service Information