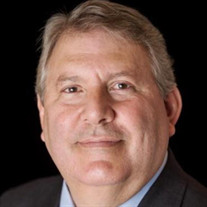 George Stephen McVay passed away suddenly on April 12, 2021, at age 63, at his home on Smith Mountain Lake, Huddleston, VA. He was born on March 31, 1958, to his loving parents, Dr. George and Laila McVay, who predeceased him. He is survived by his beloved wife of 42 years, Nancy McVay, of Huddleston, VA, daughter Sarah Lardner (Tom), son Neil McVay and daughter Karen Juste (Didier), two grandchildren, Maeve and Maura Lardner, and was eagerly anticipating the births of two grandchildren. He was dearly loved by his sisters, Suzanne Novelli (David), Michele Crowley (William), Laila McVay, and Janine McVay (Robert Pettersen) and their families, and lifetime friends, Mike and Donna Ludovico, Francie Poole and Tommy Hurder. He also leaves his parents-in-law, Rita and Jerry Gell, sisters-in-law Anne Malsbury (David), Mimi Duerr, and Kathy Gell, and their families, and many aunts, uncles and cousins who were dear to him. George graduated from Christian Brothers Academy, with honors, in 1976, and from Rensselaer Polytechnic Institute with a Bachelor of Science in Engineering, cum laude, in 1980. He married Nancy, his high school sweetheart, shortly after college graduation, and their dreams of travel and adventure began as George accepted a job with DuPont in Richmond, VA. They bred puppies, built houses, tended gardens and started a family. They would ultimately move 14 times in their 42 years of marriage. George’s career with DuPont spanned 37 years. He was a “company man” through and through, respected as a leader who viewed every problem as an opportunity and took pride in developing others. He received awards for upholding the highest safety standards and consistently exceeding performance objectives. He spent his early years working as an engineer in manufacturing but quickly took interest in other areas of the business. His curiosity, determination and hard work landed him national and international roles spanning operations, sales, human resources, supply chain and business development. These diverse experiences prepared him for his ultimate role as Senior VP of Global Business & Integration Operations for DuPont’s Diagnostics business before he retired in 2017. George was the “rock” of his family – a steadfastly devoted Husband and Father, a beloved Poppy to his grandchildren and a fun-loving Uncle to his many nieces and nephews. He was Mr. Fix-It, with no project too big or too small, and he always had a checklist. He gave great advice, loved to affectionately tease and relished his role as “the grill master”. George’s favorite places were in the company of family around the dinner table, in his garage workshop, and in the captain’s seat of any boat. Summers spent on Skaneateles Lake, NY, with extended family gatherings, were among his fondest memories, and he and Nancy continued that tradition, hosting family reunions throughout the years. Private funeral services will be held on Saturday, May 8, 2021. Funeral St. Mary’s of the Lake, Skaneateles, NY followed by a Christian Burial at Woodlawn Cemetery, Syracuse, NY. Thomas J. Pirro Jr. Funeral Home is handling local arrangements. Memorial contributions may be made to St. Jude Children’s Research Hospital and Saints Church in Brooklyn, NY.

George Stephen McVay passed away suddenly on April 12, 2021, at age 63, at his home on Smith Mountain Lake, Huddleston, VA. He was born on March 31, 1958, to his loving parents, Dr. George and Laila McVay, who predeceased him. He is survived... View Obituary & Service Information

The family of George Stephen McVay created this Life Tributes page to make it easy to share your memories.