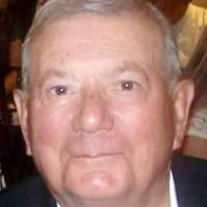 Gerald “Gerry” Gittino, 85, passed away at St. Joseph’s Hospital on May 11, 2021. He joins the rest of his family, his father Salvatore "Sam” Gittino, mother Frances (Antonecchia) Gittino, brother Bob Gittino and sister Stella Gittino at the dinner table once again for some macaroni and meatballs. But back in this world, Gerry will be missed by his family, friends, and co-workers. Gerry attended Central Tech High School, where he was a good student and played on the basketball team. After graduation, he joined the New York Air Force/Air National Guard (174th Tactical Fighter Group, “The Boys from Syracuse”) where he served for nine years in several countries, most notably during the Berlin Crisis. His name is on the Berlin Crisis Honor Wall display at the Onondaga County War Memorial. After his honorable discharge, Gerry started work at Allied Chemical (now Honeywell). His father and brother also worked there, but his job was in railroad operations, where he worked as conductor and engineer on four locomotives. He often arrived an hour early because he loved the job so much. He thoroughly enjoyed working outside, at an often-dangerous job, working alongside trusted co-workers who became his close friends. He retired after 30 years. While attending Mass at St. Brigid’s in Syracuse, he spotted a beautiful young lady (Janice Sciancalepre), and promptly told his father “That’s the girl I’m going to marry.” And he did marry her, at that same church, on September 3, 1966. Fifty-four years of a loving marriage to Janice resulted in three children and a good size extended family. Daughter Geraldine “Geri" Gittino; son David (who says he’s the favorite), his wife Deloris (Britton), their children Aaron and Ryan; and son Stephen, his wife Paola (Carrara) and their son Sebastian. He is also survived by his nieces, nephew, grand-nieces, and grand-nephew. Gerry enjoyed working around the house and spending time outdoors, family dinners, and having a beer with pals. He was a long-time member of the VFW as well as a communicant and volunteer at Immaculate Heart of Mary in Galeville. His and Janice’s favorite vacations were their annual trips to Lake George in July. As of late, his sole occupation has been lovingly taking care of Janice. Gerry’s family would like to thank all the phenomenal staff involved with his care at St. Joseph’s Hospital. Funeral services will be held at 9:00 am on Tuesday, May 18, 2021 at the THOMAS J. PIRRO JR. FUNERAL HOME, followed by a Funeral Mass in celebration of Gerry’s life at 10:00 am at Immaculate Heart of Mary Church 425 Beechwood Ave Liverpool, NY. Family and friends may call from 4:00 – 6:00 pm on Monday, May 17, 2021 at the THOMAS J. PIRRO JR. FUNERAL HOME, 3401 Vickery Rd. (corner of Buckley Rd.) North Syracuse, NY. In lieu of flowers, Gerry would appreciate a contribution to the Michael J. Fox Foundation for Parkinson’s Research or the St. Joseph’s Health Foundation. And if you’d like to honor his memory on a more casual basis, have a beer and raise a toast to him. He’d like that.

The family of Gerald C. "Gerry" Gittino created this Life Tributes page to make it easy to share your memories.

Send flowers to the Gittino family.