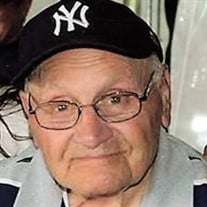 Henry J. Natalizio, 99, of Syracuse passed away peacefully at his home on Monday, April 19, 2021. Henry was a lifetime resident of Syracuse, born to the late Charles and Mamie (Parella) Natalizio. He served in the US Army as a medical technician, participating in campaigns Normandy, Central Europe, Northern France, Ardennes, Rhineland, and Air Offensive Europe. He earned a European-African-Middle Eastern Theater Ribbon with 6 Bronze Stars, a Good Conduct Medal, and 3 overseas service bars. After his military service, Henry worked for Anthony’s Flower Shop, which ultimately inspired him to open his own shop, “Flowers by Henry.” He owned and operated the shop alongside his wife Helen for many years. In addition to his work as a florist, Henry also drove the flower car for the Pirro family up until the age of 95 and was considered a staple of the funeral home. In his spare time, Henry was an avid bowler and later in life enjoyed watching SU basketball, the NY Yankees, being outdoors taking care of his yard, and of course, trips to the casino. Besides his parents, Henry is predeceased by his wife, Helen (Lapenta) Natalizio in 2007, two brothers, Nicholas (Stella) and Joseph (Bessie) Natalizio. He is survived by his sons, Dr. Charles F. (Loretta) Natalizio of TX and Frank L. (Sue) Natalizio of CA; five grandchildren, Jeff, Sara, Danny, Jenna, and Anna; six great-grandchildren, and his sister-in-law and brother-in-law Dianne and Howard Phipps. Also surviving Henry are several nieces, nephews, and cousins. A funeral mass in celebration of Henry’s life will take place at 10 am on Wednesday, April 28, 2021 in All Saints Church, 1340 Lancaster Ave. Syracuse. For those who wish to attend the mass remotely please visit allsaintssyracuse.org. Private entombment will take place in St. Mary’s Cemetery, Dewitt, where Henry will be laid to rest with his wife, Helen. In lieu of flowers, contributions may be made to Hospice of CNY, 990 7th North St. Liverpool, NY 13088, or Francis House, 108 Michaels Ave, Syracuse, NY 13208.

Henry J. Natalizio, 99, of Syracuse passed away peacefully at his home on Monday, April 19, 2021. Henry was a lifetime resident of Syracuse, born to the late Charles and Mamie (Parella) Natalizio. He served in the US Army as a medical technician,... View Obituary & Service Information

Henry J. Natalizio, 99, of Syracuse passed away peacefully at...

Send flowers to the Natalizio family.