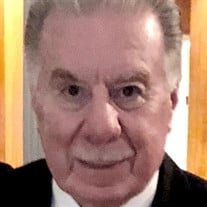 James A. Salvatore, 77, of Syracuse, passed away peacefully on March 30, 2021 in the comfort of his home with his beloved wife, Roseann by his side. James was born in Syracuse on September 8, 1943, son of the late James and Jennie Salvatore. Jim is survived by his wife and best friend, Roseann (Noto) Salvatore, and three children, Stephen (Amanda) of CA, Jennifer (Brian) Vogelman of Chicago and Kimberly (Brian) Bambeck of SC; four grandchildren, Stephen, Isaac, Santino and Michael; and two brothers, Robert and Gary Salvatore, both of Syracuse. James was a 1961 graduate of CBA and 1967 cum laude graduate of Syracuse University majoring in Political Science and History while earning a BA degree. After graduating from Syracuse, he attended John Marshall Law School in Chicago. He then joined General Electric as a planner and financial analyst. After a short and successful career there, he began his lifetime career in the wine and spirit industry in 1972, traveling extensively throughout the US and Europe. He received numerous accolades throughout his career. Jim was an avid fan of SU sports, especially football and basketball and was a very close friend of former SU great, Floyd Little, #44. Jim was a very proud father and shared with his wife Roseann that his most important accomplishment in life was his three children and his love for his four grandsons. He touched people with not only his willingness to help others, but also with his very strong, spiritual beliefs. There will be no services due to Covid. A memorial service will be held at a later date. Funeral arrangements entrusted to THOMAS J. PIRRO JR. FUNERAL HOME. Roseann would like to thank Dr. Rahul Seth and his staff for the wonderful and compassionate care given to Jim. Contributions may be made to the Cathedral Academy at Pompei, 923 N. McBride St., Syracuse, NY 13208.

James A. Salvatore, 77, of Syracuse, passed away peacefully on March 30, 2021 in the comfort of his home with his beloved wife, Roseann by his side. James was born in Syracuse on September 8, 1943, son of the late James and Jennie Salvatore.... View Obituary & Service Information

The family of James A. Salvatore created this Life Tributes page to make it easy to share your memories.

James A. Salvatore, 77, of Syracuse, passed away peacefully on...

Send flowers to the Salvatore family.