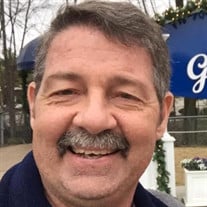 Jeffrey T. “Jeff” Blackburn, 61, of Brewerton, passed away peacefully on December 30, 2021, at Samaritan Medical Center in Watertown with his family by his side. Jeff was born in Syracuse and graduated from CNS High School in 1978 and the Ohio Diesel School, Cleveland, OH in 1980. He was the owner and operator of Blackburn Truck Bodies LLC since 2005, working alongside his son, Ryan. Jeff previously owned and operated J & R Blackburn Inc. Fuel Delivery Truck. In 2020, Jeff celebrated 30 years of being the longest liver transplant recipient out of Boston, MA. Jeff was an adventurous person, living life to the fullest. Jeff began racing Mod Lites in 2006 alongside best friends Jeff Hays, and Terry Lapham. He then switched to big block modified in 2016 with the help of friend Terry Freund. Jeff enjoyed being a jack of all trades, but a master of none. Jeff built his dream home alongside his father and grandfather in 1986. He enjoyed restoring classic cars with his high school best friend Steve Bush. Jeff enjoyed playing Cornhole with his friend Roger Stevens, and Tuesday night guitar practices alongside his good friends Darren Recore and Rick Van Gorder. He enjoyed many motorcycle and snowmobile rides with friends Ken Wolfe and Jim Blackburn. He took many trips in his RV down to FL, to visit family and friends and enjoyed making homemade wine in the fall. Most of all, he loved to spend his summers at his newly restored camp along the river with his wife and best friend Nancy, going for many boat trips along the lake. Jeff was the most selfless person; he would give the shirt off his back to anyone in need. Jeff was predeceased by his paternal grandparents, George and Evelyn Blackburn, and maternal grandparents, Carlton, and Florence Homan. He is survived by his loving wife of 9 years, Nancy (Hulbert/Teska) Blackburn, children, Noelle Teska, Ryan (Leah) Blackburn, Ashley Blackburn (Zach Hall), and Rebecca Teska; grandchildren, Alainea, Avery, and Kinsley Blackburn, and one grandchild on the way in July, 2022; his parents, Richard and Patricia Blackburn; siblings, Mark, and Laurie Blackburn; nieces, Jessalynn Blackburn (Jimmy Walker), and Brianne (Ryan) Wall; close friends, Jim (Lori) Blackburn, Terry (Karyn) Freund, and his bonus sons, Lane, and Devin Bush; he is also survived by his beloved dog, Gizmo. Family and friends may call on Wednesday, January 5, 2022, from 3:00 – 6:00 pm, a funeral service in celebration of Jeff’s life will be held immediately following at 6:00 pm at the THOMAS J. PIRRO JR. FUNERAL HOME 3401 Vickery Rd. (Corner of Buckley Rd.) N. Syracuse, NY 13212. Jeff will be laid to rest in the spring in North Syracuse Cemetery. His family would like to thank all the nurses and staff at Samaritan Medical Center in Watertown for their care and compassion to Jeff. In lieu of flowers, contributions may be made to the Finger Lakes Donor Recovery Network, 475 Irving Ave., Unit 102B, Syracuse, NY 13210.

Jeffrey T. &#8220;Jeff&#8221; Blackburn, 61, of Brewerton, passed away peacefully on December 30, 2021, at Samaritan Medical Center in Watertown with his family by his side. Jeff was born in Syracuse and graduated from CNS High School in 1978... View Obituary & Service Information