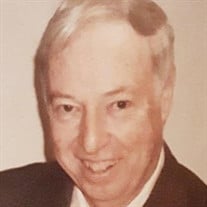 John E. "Bud" Furze, passed away on Dec. 23rd, just 11 days after his 90th birthday. He was the oldest son of John and Marion Furze and the grandson of Syracuse Fire Chief, Edward Gieselman and Elizabeth (Joy) Gieselman and Richard and Anna (Farrell) Furze Born and raised in Syracuse, Bud attended public schools and graduated from Central HS where he played baseball as a left-handed first baseman. He went on to graduate from LeMoyne College with a degree in Industrial Engineering. His career at Crouse-Hinds spanned more than 30 years. Any new job coming into the plant, Bud set up the process. He was often found on the factory floors, talking with the workers about more efficient ways of getting the job done! His advice to those retiring was to have three passions; Bud’s were woodworking, reading everything there is to know about the Civil War and golf. Although due to a back injury at a young age, he would admit he did not excel in the latter. In 1977, Bud married the love of his life, Dolores Ciravolo and they celebrated 43 years of marriage in July. Bud’s first date with Dolores was a typical, summer Sunday at the family cottage on Skaneateles Lake where she was introduced to around 45 Gieselman/Furze family members. No worries tho’, the family loved her right away! Two years later they married and moved to Liverpool, NY where they raised their son, Stephen. Besides his parents and grandparents, Bud was predeceased by his sister and brother-in-law, Joan (Bob) Mayer who gave him his nickname by introducing him as her “little budder”. She was one year older than Bud. Bud is survived by his loving wife, Dolores (Ciravolo) Furze; son, Stephen (Kathleen) Tallant and his beloved grandson, Alejandro from Audubon, PA. He also leaves behind his brother, Ted Furze and his sister, Jude (Mike) Timmins; along with several nieces, nephews and cousins. Calling hours will be held on Wednesday, December 30, 2020 from 10:30 to 11 a.m. followed by a Mass of Christian Burial in celebration of Bud’s life at 11 a.m. at Christ the King Church, 21 Cherry Tree Circle, Liverpool, NY. Entombment will follow in Woodlawn Cemetery Mausoleum. In lieu of flowers, a donation can be made to St. Jude’s Children’s Research Hospital at stjude.org Bud’s favorite saying, in latter years was: “I just take it as it comes”. Great advice for growing old and dealing with a year like 2020!

John E. "Bud" Furze, passed away on Dec. 23rd, just 11 days after his 90th birthday. He was the oldest son of John and Marion Furze and the grandson of Syracuse Fire Chief, Edward Gieselman and Elizabeth (Joy) Gieselman and Richard and Anna... View Obituary & Service Information

Send flowers to the Furze family.