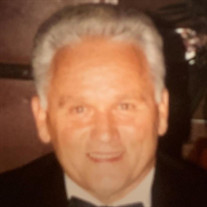 John Donald “Jack” Reale, Sr. of Syracuse, N.Y. passed away peacefully on Tuesday, November 24, 2020 at the age of 91. Jack, with his trademark “twinkle in his eye”, lived a long and amazing life. Jack was born at the start of the Great Depression--the son of an Italian immigrant mother and a first-generation Italian American father and grew up on the North Side of Syracuse. Jack attended North High School and graduated in 1947. He excelled in school, particularly in math and science. After school he worked at his father’s auto-mechanic business to help support their family. As a senior he was voted the boy with the “nicest personality”. Always a scholar, he entered Syracuse University and studied electrical engineering, graduated with bachelor’s and master’s degrees, was inducted into Eta Kappa Nu and Sigma Xi honorary societies, and continued with his coursework nearly completing his PhD until his studies were interrupted by family obligations. On July 4, 1957, he married the former Jeanette Albino, and they had five children. In 1958 he was hired as a radar antenna design engineer by General Electric Company, starting a career that would bring him great renown and recognition. Jack was a tireless inventor. He is the holder of four US patents and one international patent for his many innovative radar antenna designs. His antennas are in radar installations strategically placed around the world in both domestic and foreign locations and are used to detect and track medium and long-range ballistic missiles. They are relied upon by the United States for its national defense. Jack’s masterpiece design was the PAR radar antenna. His innovative design completely re-imagined antenna structure in a dramatic paradigm shifting manner and was presented by Jack at a West Point Symposium in 1974. It became an unprecedented success and was later featured on the cover of the prestigious Scientific American magazine in February 1985. The PAR radar, located in Concrete, North Dakota, became the largest radar installation in the world and is still in use today. Years later Jack designed another equally noteworthy antenna for a radar known as Over-the-Horizon, which is currently the largest radar in the world. Jack is described by his former engineering colleagues as brilliant, tough, and strong, and as a humble and trusted friend. He was also known as a patient, generous teacher, who never withheld knowledge that might be helpful to them. After he retired, he started a weekly “luncheon club” for the retired engineers. Jack was dubbed the “man with the golden arm” by his friends. He excelled at golf (once getting a “hole in one” trophy) as well as tennis and especially handball, which he played twice weekly at the YMCA for many years into his eighties. Jack practiced his Catholic faith for his entire life. He was a lifelong communicant of Our Lady of Pompei/St. Peter Church and an active member of the Men’s Holy Name Society. Jack had a beautiful and loving heart, and his family was his top priority. He always showed up to support his children and grandchildren at their athletic, performing arts and school related events. He was known for giving them great life advice and encouragement. He loved going on family picnics and cheering on his favorite Syracuse University Orange sports teams. Jack’s family wishes to express their deep appreciation and sincere thanks to the loving nurses and doctors at Upstate Medical University, and to Jack’s caretaker, Diana, who lovingly cared for him each day during his time of need. Jack is survived by his wife, Jeanette Reale of Syracuse; his sister, Shirley Damiano of Lyncourt; children, Cheryl Storie (Kyle) of Fayetteville, NY, Deborah Reale (Otis Jennings) of Syracuse, Jack Reale, Jr. (Roseann) of Liverpool, Michael Reale (Lori) of Syracuse and Jim Reale of Liverpool; grandchildren, Taylor Reale, Mariah and Natalie Storie, Lindsay and Kate Reale, Sergianni and Rafael Jennings, Halle Reale, and a large extended family of nieces, nephews and cousins. A private mass of Christian burial was held on November 28, 2020 at Our Lady of Pompei/St. Peter Church, Syracuse, NY. Link to mass webcast: https://www.tjpfuneralhome.com/obituaries/John-Reale/. Jack was interred at Woodlawn Cemetery Mausoleum, Syracuse, NY. Anyone wishing to make a donation may donate to geeksrule.org, a 501(c)(3) nonprofit organization established to increase interest and proficiency in Science, Technology, Engineering and Math (STEM) among underserved youth. If you donate through the website, please also send an email to [email protected] confirming that your donation was made in memory of Jack Reale. Geeks Rule will be providing a year-long after-school STEM program at a local public school in his honor.