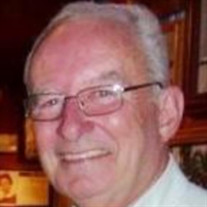 John J. "Jack" Smith, 79, of Liverpool, passed away Sunday, May 30, 2021, surrounded by family and love. A native Long Islander, Jack grew up in Freeport before graduating from Hampton Bays High School. He moved upstate to attend SUNY Morrisville and then enlisted in the United States Army. After serving his country, Jack decided to pursue a teaching career and earned his bachelor's and master's degrees at SUNY Oswego, where he made many lifelong friends. One of those friends, Walt Malloy, introduced Jack to his future wife, Joan Sobotka. They were married in 1967 and had three children, Michael, Tammy, and Jackie. Jack taught his kids how to drive, how to balance a checkbook and the importance of always paying their credit card bills in full, but his most significant life lesson was that family comes first. He was always there for their sporting events, concerts, and other special occasions. He and Joan spent countless hours in the Capital Region helping to take care of their grandchildren, and when she got sick with cancer, he was a devoted caregiver until her death. Jack was a long-time dean of students at Cicero-North Syracuse High School, where he also taught aviation/aerospace. Early in his career, he taught auto shop and industrial arts. After his retirement in 1999, he enjoyed staying busy with part-time work at H&R Block, Sears Hardware and Sharon Chevrolet. Jack was the life of the party, loved by everyone for his storytelling and sense of humor. He was a proud Irishman who made three unforgettable trips to Ireland. He looked forward to Syracuse's St. Patrick's Day parade every March and toasted his heritage on the 17th of every remaining month with the Syracuse Seventeeners, which included his companion, Betty Carbone. Betty took Jack to one final get-together with the Seventeeners two weeks before his death. He will be missed by many. In addition to his daughters, Jack is survived by eight grandchildren: Shaina and Aleah Smith; Tommy, James, Sophie, and Joe Aquino; and Sarah and Katie Domin. He is also survived by his companion, Betty Carbone; a brother, Bill (Linda) Smith of Florida; his son-in-law Gabriel Aquino; and his daughter-in-law Denise Smith. His son, Michael, died in 2007, and his beloved wife Joan died in 2010. He was also predeceased by his parents; his brother, Jim; and his sister, Joan. Calling hours are Thursday, June 3, 2021, from 4 to 7 p.m. at THOMAS J. PIRRO JR. FUNERAL HOME, 3401 Vickery Road, (corner of Buckley Rd.) North Syracuse. A Mass of Christian Burial will be celebrated Friday, June 4, 2021, at 9:30 a.m. at St. Joseph the Worker Catholic Church, 1001 Tulip St., Liverpool. Burial will follow in Our Lady of Peace Cemetery, Baldwinsville. In lieu of flowers, the family suggests donations to the Michael J. Fox Foundation for Parkinson’s Research.

The family of John J. "Jack" Smith created this Life Tributes page to make it easy to share your memories.

Send flowers to the Smith family.