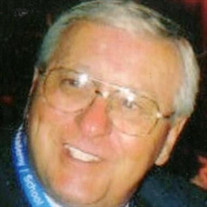 Joseph Richard “Dick” Bell, 86, passed away peacefully on August 20, 2020 in Sun City Center, Florida. Born on May 23, 1934 in Bradenville, PA, Joseph was raised in Syracuse, NY where he married Carolyn (O’Brien) on September 16, 1961. She survives. Joseph graduated from Cathedral of the Immaculate Conception High School in 1952. From 1955 to 1957, he was on active duty in the US ARMY, stationed in Bamberg, Germany. In 1959, Joseph joined the US Post Office in the University section of Syracuse as a Letter Carrier, retiring after 31 years of service in 1990. He spent his retirement summers on the St. Lawrence River in Alexandria Bay, NY and the winters in Lake Wales and then Sun City Center, FL. Joseph could be seen zipping around the town of Alex Bay in his yellow vintage Jeepster, on his way to golfing with friends or taking a ride with Carolyn with the top down. His greatest golfing achievement occurred in July of 1995, when he hit a hole-in-one with friends. His great sense of humor and love of social gatherings will be deeply missed by friends and family. His sons are grateful for him introducing them to auto racing, spending many, many Saturday nights together at Oswego Speedway during the summers. He is also survived by his 2 sons, Jeffrey of Westfield, IN and Michael of Mexico, NY. He was preceded in death by daughter Linda in 1962 and brother James (Susan) in 2004. A Funeral Mass in celebration of Joseph’s life will be held at 10 AM on Friday, April 23, 2021 at Christ the King Church, 21 Cherry Tree Circle Liverpool, NY. Private burial will take place in Assumption Cemetery.

The family of Joseph Richard Bell created this Life Tributes page to make it easy to share your memories.

Send flowers to the Bell family.