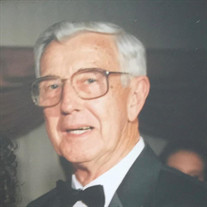 Joseph Francis Conley, 99, of North Syracuse, passed away peacefully at home on Monday, January 31, 2022 surrounded by his loving family. Joe was born in New Haven, CT to the late William and Mary (Murphy) Conley. He attended Dartmouth College and during his time there, Joe served as the captain of the Track and Field team and earned himself medals for multiple events during both the 1945 and 1946 National Track and Field Championships. Throughout his tenure at Dartmouth, Joe was also active in the Navy from 1943 – 1946, subsequently entering the Navy reserves. In 1946 he was recognized as Class Marshall and graduated with a Bachelor of Arts degree. He was later inducted into the Dartmouth Wearers of the Green Hall of Fame in 1984 for his Track and Field excellence and leadership. Joe had a very successful career at General Electric where he was a Division Manager of Financial Planning and Analysis and retired after 38 years of distinguished service. When Joe wasn’t hard at work providing for his family, he was known to be found on the golf course or the tennis court. Sports weren’t his only interest, he also enjoyed gardening, and loved to camp, fish and spend time with his family. Besides his parents, Joe is predeceased by his wife, Elizabeth Jane (Ponsoll) Conley in 1980 and his siblings, Bill (Odette), Pat, and Joan (William). He is survived by his son, James (Joyce) Conley; his grandchildren, Jerry (Andrea) Blanchard, Jen Connors and Jeff (Tobie) Conley; his great-grandchildren, Sydney Blanchard, Elisabeth Connors and Jeffrey Conley; as well as a niece and several nephews along with their spouses and children who loved him dearly. The family would like to extend a special thanks to Joe’s caregivers, Denise, Janet and Shirley. Calling hours will be held from 1 – 3 pm on Sunday, February 6, 2022 immediately followed by a funeral service in celebration of Joe’s life at 3 pm at the THOMAS J. PIRRO JR. FUNERAL HOME, 3401 Vickery Rd. (corner of Buckley Rd.) North Syracuse. He will be laid to rest with his wife, Elizabeth in St. Mary’s Mausoleum, DeWitt. Contributions in lieu of flowers may be made to the B&R Bunkhouse Adoptables, 6225 East Taft Rd. North Syracuse, 13212.

Send flowers to the Conley family.