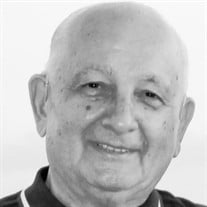 Joseph, a devoted family man, a loyal son of Solvay, and avid Syracuse University football fan, passed away peacefully in Ladera Ranch, CA with family by his side on August 12, 2021. Joseph was a 1953 graduate of Solvay High School, a 1957 cum laude graduate of Syracuse University with a BEE and MEE. He completed advanced engineering courses at Cornell University, University of Oklahoma, and George Washington University. He also attended many symposiums on Engineering and Advanced Mathematics. During his professional career from 1957-2017 he served as Superintendent for the Villages of Solvay and Bath electric department. His career is highlighted by his time as a consultant on the conversion of Massena from a public electric utility to a municipal utility. He spent the last 33 years of his career as a DOD civilian assigned to Lockheed Martin overseeing Naval Defense contracts. He was a member of Theta Tau, a former Knights of Columbus and Holy Name Society member, and a Board member of Solvay Tigers. His greatest passion was spending time and vacationing with his family. He also loved attending both Army/Navy football games and Syracuse University football games. Joseph was predeceased by his parents, Cosimo and Rachel (Tuori) Fragnito and sister, Mary Iamondo. He is survived by his wife of 52 years, AnnaMarie (Canino); two sons, James (Alison) of Syracuse, NY, Joseph (Ashley) of Greensboro, NC; two daughters, Rachelle Fragnito-Dufault (Anthony) of Ladera Ranch, CA, Carmelanne Schmitz (Daniel) of Rochester, NY; twelve grandchildren, one great-grandson; his brother, Daniel (Josephine) of Solvay, NY and several nieces, nephews, and cousins. Visitation will take place from 5 - 7pm on Friday August 27, 2021 at the THOMAS J. PIRRO JR. FUNERAL HOME, 3401 Vickery Rd. (corner of Buckley Rd.) North Syracuse, NY. A Mass of Christian Burial will be held at 10am on Saturday, August 28, 2021 at St. Marianne Cope Parish (St. Cecilia’s), followed by entombment at St. Mary’s Mausoleum, DeWitt, NY. In lieu of flowers, donations in Joe’s memory may be made to St. Marianne Cope Parish at 1001 Woods Road, Solvay, NY 13209 or the Franciscan Center at 233 North Greene Street, Greensboro, NC 27401.

Joseph, a devoted family man, a loyal son of Solvay, and avid Syracuse University football fan, passed away peacefully in Ladera Ranch, CA with family by his side on August 12, 2021. Joseph was a 1953 graduate of Solvay High School, a 1957... View Obituary & Service Information

The family of Joseph P. Fragnito created this Life Tributes page to make it easy to share your memories.

Joseph, a devoted family man, a loyal son of Solvay, and avid...

Send flowers to the Fragnito family.