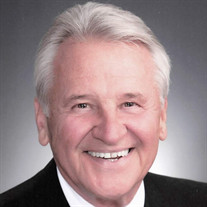 It is with profound sadness that we announce that Joseph Janowski passed away on September 18, 2021 after a brief illness. He was 79 years old. Joe was an exceptional man with a passion for business, an enduring spirit and an incredible zest for life. Joe was born in 1942 in Vernon, NY to Polish immigrant parents, the eleventh of twelve children. He did not speak English until he was five years old. His older siblings would say that they recognized at a young age that Joe was gifted and born with a certain sparkle. He was destined to do great things and transform lives. Joe was the first in his family to go to college, at the young age of 16. He attended Albany School of Pharmacy, graduating in 1963 near the top of his class. He then applied and was accepted to medical school, but his passion for people and deal-making drew him into the business arena where he excelled. He was an entrepreneur in its purest sense and the epitome of the American Dream. He purchased his first pharmacy in 1968 and subsequently opened numerous pharmacies in New York and Florida. He is the owner of Recreo Medicated Powder Company that distributes to nursing homes, hospitals and pharmacies all over the country. After successfully operating the drug stores, Joe applied his talents and work ethic to commercial real estate, developing apartment complexes, office buildings, medical buildings, and retail shopping centers. His pride was Bayberry Plaza in Liverpool, which he has owned since 1976. He purchased Travel Leaders in 2002. He never stopped thinking of new projects and possible endeavors, and he maintained his pharmaceutical license in both New York and Florida throughout his life. Joe was a pillar in the community and served on a number of boards throughout his career, including the Onondaga County Pharmacy Association (Past President), College of Democracy in Washington, D.C., the National Kidney Foundation, and the Heart Association. He previously served as a Board Trustee for Alliance College, Cambridge Springs, Pennsylvania. Joe additionally served on the Boards of the Landmark Theater, the Greater Syracuse Hall of Fame (Past President) and the Syracuse University Basketball Hardwood Club. Joe was the Treasurer of the Syracuse Chief’s Board of Directors and was instrumental in forming Chief’s First, the organization that saved minor league baseball for Syracuse. In 2007, he was named “Business Man of the Year” by the Liverpool Chamber of Commerce. Joe was very proud of his Polish heritage. He served as an American Director of the LLC Poland Foundation in Williamsport, Pennsylvania. With all of his business accomplishments, one of his proudest achievements was funding a Little League baseball field in Jaslo, Poland. He worked with baseball Hall of Famer Stan Musial, a dear personal friend, to build a stadium and training center for Little League Baseball in Warsaw, Poland. This was the first of its kind outside of the United States and has served over forty-five countries. Joe loved the outdoors. He was an instrument rated licensed pilot for the past forty years and enjoyed flying his Piper Saratoga airplane for both leisure and business. He was a generous man and contributed to and performed Mercy Angel flights for people in need. It was not unusual for him to take off in his plane on a beautiful blue-sky day and fly over the farm in Vernon where he was raised. He would say flying quieted his mind and brought him peace Joe was an avid SU sports fan, loved a good tailgate party, the Yankees and the Buffalo Bills. He loved the game of golf (when he played well) and was a member at Lakeshore Yacht & Country Club for twenty-five years. Joe had a well-known love of horse racing and a love for his own race horses (when they won). Joe was an exceptional man with an enduring spirit and smile that would light up any room he entered. For as much as he had passion and love for business, his greatest passion was his family and friends. He loved spending time with his wife Susan, his children and grandchildren, including short winter stays in Florida, summers at the shore, and traveling through Europe. He was a wonderful loving husband, father, grandfather and uncle. Joe leaves behind a legacy of entrepreneurial spirit, cultural pride, strong work ethic and a deep love for his family, friends and his community. May he inspire others to do the same. Joe is survived by Susan (Basile) Janowski, his wife of thirty-four years; their son Casey, and Joe’s children Joe (Betsy), Kate (John) and Beth; his brother John (Joyce); his grandchildren Caitlinn and Connor Jones and Abigail, Allison, and Henry Janowski; his mother-in-law Dolores Basile; his brother-in-law Tony Basile (Carol) and sisters-in-law Lottie Janowski and Michele Mills along with numerous nieces, nephews, and countless friends. Calling hours will be held on Friday, September 24, 2021 from 4:00-7:00 PM at the THOMAS J. PIRRO JR. FUNERAL HOME, 3401 Vickery Rd (corner of Buckley Rd) North Syracuse, NY. A funeral Mass in celebration of Joe’s life will take place at the Basilica of the Sacred Heart of Jesus, 927 Park Ave, Syracuse, on Saturday September 25, 2021 at 9:30 AM. In lieu of flowers, donations may be made to the Strong Memorial Hospital Pediatric Cardiac ICU or Upstate Medical ICU. Susan would like to personally thank the Upstate Medical Center ICU, nurses, Dr. Dhir, Dr. Whitney and Dr. Mark McConn for the care and dignity they provided to Joe.

It is with profound sadness that we announce that Joseph Janowski passed away on September 18, 2021 after a brief illness. He was 79 years old. Joe was an exceptional man with a passion for business, an enduring spirit and an incredible zest... View Obituary & Service Information

The family of Joseph S. Janowski created this Life Tributes page to make it easy to share your memories.

It is with profound sadness that we announce that Joseph Janowski...

Send flowers to the Janowski family.