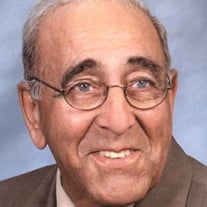 It is with deep sorrow and much love that we mourn the passing of Joseph Picciotto of North Syracuse on Monday, July 5, 2021, at the age of 93. He was born in 1928 to Grace and Giuseppe Picciotto of Syracuse. Dad worked most of his childhood with his family in the local produce business. His father’s trucks were emblazoned with the slogan “JP is here”. Went to North High in Syracuse and at seventeen tricked his father into signing forms to join the Navy at the end of WWII. He proudly served for 4 years. His brother-in-law, Dan Cappa helped he and his brothers find jobs with the Genesee Beer distributor in Syracuse. Working first for the Strodel family and then Delia and Smith, he spent decades servicing the stores, bars, and local restaurants in town. In 1953, he married a beautiful girl from Arkansas named Mary Wayne Thrasher and together raised 10 children in a home that he helped to build next door to the home he grew up in and where his parents still lived in Lyncourt. The children were educated at St. Daniels and Lyncourt Elementary schools. We attended St. Daniel Church each week where we always took up a full pew. Growing up, Dad brought us there every Sunday in the family station wagon, always at 12 o’clock mass and he was always dressed in a suit and tie. He was a member of the Usher Club and served until he was physically unable to do so. In 1971, with the help of his brother Patrick, our dad and his brother Anthony and their wives opened Pat’s Pizza Lyncourt at 2324 Court Street. It was very successful, but Dad always kept that second job. We lost our mother in 1992. And we grieved. But our dad didn’t slow down. He played a little golf, volunteered with Meals on Wheels, grew tomatoes, and doted on his mother, siblings, children, and grandchildren. In a miraculous stroke of luck, he found love again; at 84, Dad met, fell in love with and married Elizabeth, a true gift to us all. She made him promise he would give her 10 good years. He was diagnosed with Alzheimer’s after their first year together. Her support and patience filled his last years with the same love and strength he showed all of us throughout his life and we thank her for that. Their 10th Anniversary would have been this November. He is preceded in death by his first wife, Mary Wayne (Thrasher), parents: Grace and Giuseppe, siblings: Joseph, Sarah (Stewart), Jennie Picciotto, Pauline (Cappa), Francis (Stiles), Patrick Picciotto. Joseph is survived by his wife, Elizabeth (Placito) Picciotto, 10 children: Sandra Picciotto, Susan (Michael) Ellingworth, Brenda (Nicola) Romano, Karen (Garry) Buchanan, Joseph (Susan) Picciotto, David Picciotto, Denise (Steven) Ellingworth, Lisa Picciotto, Patrick (Chris) Picciotto, and Amy (Josh) Gaul; 24 grandchildren, 16 great grandchildren; his brother, Anthony Picciotto and 14 nieces and nephews. Family and friends may call from 4pm to 7pm on Friday, July 9, 2021 at the THOMAS J. PIRRO JR. FUNERAL HOME 3401 Vickery Rd. (corner of Buckley Rd.) North Syracuse, NY. Funeral services will be held at 9:00 am on Saturday, July 10, 2021, at the funeral home, followed by a Funeral Mass in celebration of Joseph’s life at 10:00am at St. Daniels Church, 3004 Court Street, Syracuse, NY. He will be laid to rest in Assumption Cemetery. In lieu of flowers, donations may be made to St. Daniel's Church or Alzheimer's Association, CNY Chapter, PO Box 12226 Syracuse, NY 13218.

It is with deep sorrow and much love that we mourn the passing of Joseph Picciotto of North Syracuse on Monday, July 5, 2021, at the age of 93. He was born in 1928 to Grace and Giuseppe Picciotto of Syracuse. Dad worked most of his childhood... View Obituary & Service Information

The family of Joseph Picciotto created this Life Tributes page to make it easy to share your memories.

It is with deep sorrow and much love that we mourn the passing...

Send flowers to the Picciotto family.