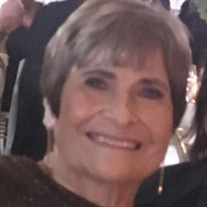 Heaven’s stars are all a little brighter since Joyce Farnett Donegan left this earth on November 27, 2020. She had the gift of making even the simplest things seem elegant. To know “Gigi” was to love her, and the feeling was mutual. She had a keen and sincere interest in people, making them feel instantly comfortable. She had an incredible memory for even the smallest details of family’s or friend’s lives. Gigi had a passion for travel, especially large family trips to Italy and yearly summer vacations at Goose Rocks Beach in Kennebunkport, Maine. A lifelong voracious reader, she always had great book recommendations to share. Twelve days before her retirement as a Human Relations specialist at Niagara Mohawk, Gigi had to rethink her life plans, due to the sudden death of the love of her life, her husband of 42 years, Jim Donegan. Together they had raised their four children with the belief that they could do and be whatever they wanted. Their encouragement of their every endeavor was a gift Gigi continued to instill in their six grandchildren. They all knew they had the coolest grandmother in the world: Ageless, beautiful, forever engaged, beyond fashionable. She was present for every family graduation, sports event, play, recital, dance revue, birthday, and celebration. Gigi treasured her friendships with her “NiMo” coworkers, especially their monthly dinners together. She also loved the recent discovery of mahjong, and the ladies who taught her to play, enjoying her time, laughs and company with them. Her home was her sanctuary, pretty large for a woman living alone, but filled to the brim with family for every holiday. She surrounded herself with lovely things that made her happy. It was there that she said her goodbyes to her adoring children James (Katherine) Donegan, Mary Patricia “Trish” (John) Abert, Kathleen (William) Henderson, Amy (Daniel) Scobell and her nephew Scott Farnett, who Gigi always called her second son, a source of unwavering love and support. Gigi was a force of nature, incredibly kind and generous, a treasure of a woman who leaves us with nothing unsaid, and a lifetime of “Gigi stories” to make us smile. Gigi was predeceased by her five brothers and one sister. In addition to her children and grandchildren, she is survived by her five beloved great grandchildren and many nieces and nephews. In keeping with Gigi’s wishes and per COVID recommendations, a private memorial service was held on December 2, 2020 at THOMAS J PIRRO JR FUNERAL HOME, with interment at Woodlawn Cemetery. If inclined to give a donation in Gigi’s memory, we thank you from the bottom of our hearts. Food Bank of Central New York, 7066 Interstate Island Rd Syracuse, NY 13209.

Heaven&#8217;s stars are all a little brighter since Joyce Farnett Donegan left this earth on November 27, 2020. She had the gift of making even the simplest things seem elegant. To know &#8220;Gigi&#8221; was to love her, and the feeling was... View Obituary & Service Information

The family of Joyce Farnett "Gigi" Donegan created this Life Tributes page to make it easy to share your memories.

Heaven’s stars are all a little brighter since Joyce Farnett...

Send flowers to the Donegan family.