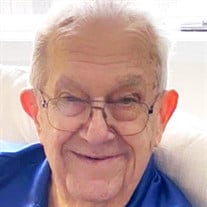 Lawrence P. “Larry” Stirpe, 88, passed away on November 7th, 2021, at St. Joseph Hospital. Larry was born to the late Lorenzo and Assunta (Fasulo) Stirpe on July 24th, 1933. Larry was predeceased by his brother P. Joseph Stirpe and sisters Antoinette Graci and Libbie Stirpe Thornton. He is survived by siblings, Rev. Carlo Stirpe and Anna (Donald) Longo, both of Syracuse. In 1953 he married the late Patricia O. (Sinclair) Stirpe, with whom he would raise four children. He would later marry Frances (Mondo) Stirpe with whom he would raise two children. Larry was blessed to be survived by all of his children, Lawrence (Michelle) Stirpe, Dr. Michael (Tracy) Stirpe, Gina (George) Musak and Patricia Conway, David Stirpe and Anthony (Andrew) Stirpe, as well as a nephew whom he raised with Patricia as a son, Charles (Susan) Gabriele. His father, founder of Roma Ristorante, would inspire Larry to start his own chain of restaurants, and eventually Lorenzo’s Wholesale Food Company on Fay Road. For over five decades, Larry worked daily alongside his family until weeks before his death. Affectionately known as "Junior" to his friends, Larry had the uncanny ability to remember prices on just about everything. While he lived life for his children, what brought him his greatest joy were his grandchildren, Kristin (Michael) Duschen, Jennifer (Jody) Godlewski, George (Shannon) Musak, Larry Stirpe (Monica Tubolino), Leanne Musak (Jay Cameron), Michael John (Colette) Musak, Morgan (Brendan) McCormick, Richard (Katie) Conway, Michael Anthony (Libby) Stirpe, Kayla Stirpe (Tim Tschernjawski), Kaitlyn Gabriele (Landrace Cruz), Jordyn Gabriele, Annalee (Jordan) Gristwood, and Claudia Stirpe. During his lifetime he would also know 10 amazing great grandchildren. One of Larry’s great loves was his dog, Maggie. Larry was a communicant of Saint Margaret Church. Larry encouraged all his children, grandchildren, and great grandchildren to be people of great character and to put family first. The love and joy Larry brought to so many was overwhelming, and the lives that he will continue to touch through the family he led is a testament to his long and significant life. For those that loved him most, there is an empty place at the table. Family and friends may call from 12 pm to 4 pm on Friday, November 12th at Saint Margaret’s Church, 203 Roxboro Rd, Syracuse, NY 13211. A Funeral Mass in celebration of Larry’s life will follow celebrated by his brother, Rev. Carlo Stirpe at 4:30 pm. Private entombment will take place in Assumption Cemetery Mausoleum. In lieu of flowers, contributions may be made to the Food Bank of CNY 7066 Interstate Island Rd, Syracuse, NY 13209 or online at https://www.foodbankcny.org, or St. Jude Children Hospital 501 St. Jude Place, Memphis, TN 38105 or online at https://www.stjude.org/donate.

The family of Lawrence P. "Larry" Stirpe created this Life Tributes page to make it easy to share your memories.