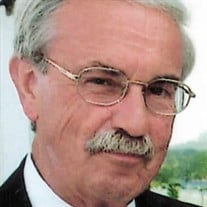 On Saturday, February 12, 2022, Lewis F. “Bud” Kennedy passed away peacefully at St. Joseph’s Hospital with his loving family by his side. Born August 5, 1945 in Syracuse, to Lewis T. and Agatha Osbelt Kennedy, Bud grew up and resided his whole life in the Valley. He was the General Manager of Green Hills Farms, the “Best Little Grocery Store in America,” as recognized by Inc. Magazine in 2001. He was recently honored for his 60 years of service but actually started working picking corn and tomatoes at the Clifford Hawkins Farm on Dorwin Ave at the age of 14. A pillar of the Valley community, in 2007 Bud was recognized with the Food Marketing Institute’s 2007 Store Manager Superior Service Award. This award recognizes the most outstanding manager from over 26,000 retail food stores around the world, including 200 companies from more than 50 countries. This was further acknowledged by Onondaga County Executive Nicholas Pirro and the Town of Onondaga Town Board which proclaimed Saturday, June 9, 2007 as Bud Kennedy Day in the Town of Onondaga. Bud was predeceased by his parents and sister, Kathleen Norton. He is survived by his loving wife of 37 years, Robin Kennedy; his sister, Mary Beth Kennedy; brother-in-law, Donald Norton; his daughter, Laureen "Lauri" (Kevin) Eipp; his son, Lewis “Buddy” (Jennifer Knox) Kennedy; 5 grandchildren, Ashley (Shawn) Coon, Kevin Jr. (Ellen) Eipp, Krista (Ryan) Chilcoat, Allison (Mack) Leonard, and McKenzie Kennedy; 5 great grandchildren, Caroline and Leo Eipp, Veronica and Will Coon, Kennedy Chilcoat and baby girl Chilcoat on the way; several nephews and nieces. When he wasn’t with his Green Hills “family,” Bud loved and cherished spending time at his camp on the River in Cape Vincent, winter retreats at Lauderdale by the Sea, and time with his family and friends. The family wishes to thank the staff at St. Joseph’s Hospital ICU and PCU for their outstanding care and support. Family and friends may call from 4-7 pm on Thursday, February 17, 2022 at the THOMAS J. PIRRO JR. FUNERAL HOME, 3401 Vickery Rd. (corner of Buckley Rd.) North Syracuse, NY. A funeral service in celebration of Bud’s life will be held at 9:30 am on Friday, February 18, 2022 at the THOMAS J. PIRRO JR. FUNERAL HOME, followed by a Mass of Christian burial at 10:30 am at Our Lady of Hope, 4845 S. Salina Street, Syracuse, NY. He will be laid to rest in Onondaga Valley Cemetery. In lieu of flowers, donations can be made to Make-A-Wish Foundation, 5005 Campuswood Dr., E. Syracuse, NY 13057 or The Nedrow Fire Dept., 6505 S. Salina St., Nedrow, NY 13120.

The family of Lewis F. "Bud" Kennedy created this Life Tributes page to make it easy to share your memories.

Send flowers to the Kennedy family.