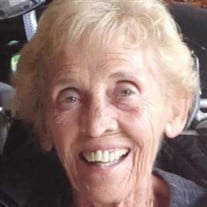 Martha Gayle (Ball) Carocci, 85, of Fort Myers, Florida, passed away peacefully at Hope Hospice in Fort Myers, Florida on Saturday, 01/02/2021, surrounded by her children, after a courageous battle with cancer. Martha was born on February 22, 1935 in Weedsport, NY, to the late Howard E. Ball and Leitha Van Antwerp Ball. She graduated from Port Byron High School as Valedictorian and Queen of her class. In 1959, she married the love of her life, Theodore P. Carocci, Sr., sharing many adventures and parenting five children. After a 30 plus year career at Marine Midland Bank, she retired as VP of Operations, and she and Ted bought a home and wintered in Fort Myers, Florida. Martha also enjoyed working for Sun Harvest Citrus for over 20 years in Fort Myers in post-retirement. Naturally athletic, Martha was an awesome fast softball pitcher back in the day, accomplished 3 holes-in-one during her years of playing golf, and was a HUGE fan of SU sports and the Yankees. Martha and Ted were well known for leading the Grand March at family weddings while Martha’s homemade Italian cookies were the favorite of all the guests. On the Fourth of July, from their home at 210 Carlton, Martha took the role of Grand Marshall in conducting parades around the neighborhood in celebration. Martha loved Christmas so much, the Carocci kids enjoyed three trees in different parts of their home - with presents - at Christmas! Martha was able to get her children out of so many jams, they nicknamed their Mom "MacGyver"! Ted and “Mart” became well known as “Ma” and “Pa” at the stops they made in their travels around Syracuse, Fort Myers, and all places in between... the couple instantly made many lasting friends who still talk of their days together with fond memories. For most that came to know Martha, however, the most popular sentiment about her was that she was an “Angel on Earth”. Martha was predeceased by her parents, her best friend and husband Ted (in 2009) and her twin brother George, (note that both were born on George Washington's Birthday – February 22nd - hence their birth names "George and Martha"); her sister, Jeanette LaDuke and her brother, James Ball. A family legend that Martha was related to Martha Washington (they both shared the maiden name “Ball”) is sworn as truth by many. Martha is survived by her five children, Christina Carocci-Harmer (Gary), Theodore “Buzz” Jr. (Bernadette) Carocci, Jeanine Carocci-Murphy, Julie Carocci-Roberts, and Joanne Carocci (Joe); her four grandchildren, Michael (Nicole) Tobin, Alicia (Kevin) Murphy, Jimmy (Alexandria) Murphy, Alex Carocci, three great-grandchildren - Lucas Murphy, Logan Murphy, and Avery Maria Murphy; her sister, Margaret Smart of Weedsport; a brother, Guy (Marie) Ball of West Bloomfield and so many nieces and nephews that adored her. Over the years these phrases bring back the love of knowing and having shared time on this Earth with Martha: “Here's to You”... ”It is what it is”...”Come on Mart”…”This too shall pass”... “You are my Sunshine”… and “Love ya, See ya, hope you had a good good time!”. We all did. A celebration of life for Martha in Syracuse will be announced in the Spring of 2021.

Martha Gayle (Ball) Carocci, 85, of Fort Myers, Florida, passed away peacefully at Hope Hospice in Fort Myers, Florida on Saturday, 01/02/2021, surrounded by her children, after a courageous battle with cancer. Martha was born on February 22,... View Obituary & Service Information

The family of Martha Gayle "Grams" (Ball) Carocci created this Life Tributes page to make it easy to share your memories.