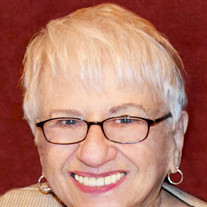 Mary (DeLuca) Maurillo, 96, passed away peacefully at home of natural causes on Monday, June 7, 2021. She was wrapped in love from family and friends. Mary was born during a Syracuse snowstorm on January 16, 1925 to Nicola and Carmela (Cutrone) DeLuca—the fourth of six children. She attended Prescott School, graduating from North High School. She returned to school with six children still at home and graduated at age 50 from Central City Business Institute with a 4.0 average. After her marriage to Lt. John Maurillo in 1944, she traveled to his Army Air Corps bases in New Jersey, Texas, and Louisiana. She was one of the last remaining WWII wives. Mary worked for John Hancock Insurance and Niagara Mohawk (National Grid) until her retirement. “Mother Mary” (also known as “Ever Ready Mary” and “Mary the Wild Woman”) was a popular, humorous, wise, and fun-loving woman who was adored by her eight children. Family weddings were not complete until she danced to “New York, New York” with the young men. She was well-read and traveled much, including to Ferrazzano, Italy to meet her cousins. A lifelong Catholic, she was a fixture at St. John the Evangelist Church and then at Assumption Church. Her family joked that she should have become a nun, but she just couldn’t get into the habit. When her children complained about being bored, she would hand them a basket of ironing or tell them to feed the baby. She also taught them how to stretch a dollar until it did a tap dance. She is survived by her eight children: Donna Maurillo (Gary Reece) of California; Jeanne (Tom) Sullivan of Syracuse; John (Marjorie) Maurillo of California; Mary Ann (Brian) Cowan of Baldwinsville; Anthony (Lynn) Maurillo of California; Susan (Ralph) Sims of Idaho; Lori (Gary) Thompson of Michigan; and Maria (Mike) Recor of Fayetteville, along with 24 grandchildren, 22 great-grandchildren, 5 great-great-grandchildren, many nieces and nephews, and sister-in-law, Carmela Maurillo. Special thanks to her devoted caregivers, Hope Cook and Kim Recor. Mary was predeceased by her former husband, her parents, five siblings (Anna Matrone, and John, Anthony, Joseph, and Francis DeLuca), and two grandchildren (Siena Prostor and Anthony Maurillo). Visitation will be at THOMAS J. PIRRO JR. FUNERAL HOME, 3401 Vickery Rd, (corner of Buckley Rd.) North Syracuse, on Sunday, June 13, 2021 from 1- 4 pm. A funeral Mass will be celebrated at Assumption Church, Syracuse, on Monday, June 14, at 10 am, with interment at Assumption Cemetery. The mass will be live streamed, please use the following link to view remotely (tinyurl.com/29u3k8kf) Donations may be made in Mary’s name to Franciscan Villa, 6900 Buckley Rd., Syracuse, or to Duchene’s Muscular Dystrophy (tinyurl.com/4ayta9hw).

Mary (DeLuca) Maurillo, 96, passed away peacefully at home of natural causes on Monday, June 7, 2021. She was wrapped in love from family and friends. Mary was born during a Syracuse snowstorm on January 16, 1925 to Nicola and Carmela (Cutrone)... View Obituary & Service Information

The family of Mary (DeLuca) Maurillo created this Life Tributes page to make it easy to share your memories.

Mary (DeLuca) Maurillo, 96, passed away peacefully at home of...

Send flowers to the Maurillo family.