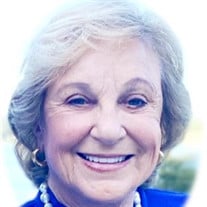 Noreen Reale Falcone humbly accepted God’s will just shy of her 84th birthday. She was a loving wife, mother, and grandmother, as well as a tireless community leader and dedicated philanthropist. Noreen left an indelible mark on all who knew her. Noreen’s greatest joy was her large and extended family. She and her husband of 60 years, Michael J. Falcone, happily raised four children, Michael (Nicole), Mark (Ellen), Michelle (Greg), and Melissa (Tom), who in turn gave them 13 grandchildren, Sonya (Peter), Olivia, Luke, Michael, Savaria, Amelia, Nathaniel, Julia, Isabella, Gabriella, Alison, Angelia, and Gaia. In death, Noreen joins her parents Joseph and Sue, together with beloved siblings, Lewis “Ted”, Joseph “Junior”, Rosemary, and Barbara. Noreen was born and raised in Syracuse, NY and was passionate about giving back to the community that gave her so much. Her time spent as an elementary school teacher sparked a lifelong devotion to empowering young people to believe in themselves to achieve their greatest dreams. Early leadership contributions included The Junior League of Syracuse and The American Cancer Society. She served in numerous positions over 30 years at her Alma Mater, Le Moyne College, including President of the Board of Governors and Regent Emeritus. Noreen was also President of The Board of Trustees at The Manlius Pebble Hill School. Noreen’s enthusiasm for the arts ran deep and wide and culminated with her becoming a lifetime Board Member at The Everson Museum, as well as serving on the New York State Council on the Arts Board. Most importantly, Noreen was a devout Catholic who spent countless hours serving people in need all over the world. Her family was most proud of her being elected as the First Female President of the 900+ year old Order of the Knights of Malta, but for Noreen, that distinction was not what mattered, carrying out the mission is what counted most for her. She was an active member at St Mary’s of the Lake and on the Board of Directors at Francis House, a Hospice care facility in Syracuse. Noreen’s good works and contributions were recognized with far too many awards to list here, and accolades and recognition were not what drove her anyway. She was motivated by an unwavering faith and love for the human spirit. Noreen’s greatest gift was her seemingly effortless ability to forge genuine and special connections with people of all stripes and backgrounds. She made us all, her family, friends, colleagues, and even passersby, feel seen and heard. Her care for each of us extended to all whom we cared for too, rendering her love infinite. Donations in lieu of gifts or flowers may be made in her memory to Le Moyne College for its Campus Ministry program: Le Moyne College Office of Advancement, PO Box 527, 1419 Salt Springs Road, Syracuse, NY 13214 or using the attached link: https://securelb.imodules.com/s/445/16/interior.aspx?sid=445&gid=1&pgid=4122&cid=7221

Noreen Reale Falcone humbly accepted God&#8217;s will just shy of her 84th birthday. She was a loving wife, mother, and grandmother, as well as a tireless community leader and dedicated philanthropist. Noreen left an indelible mark on all who... View Obituary & Service Information