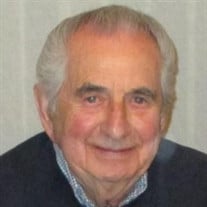 Ottavio P. “Tavio” Nami, 92, of Syracuse, passed away July 19, 2021 at Elderwood at Liverpool. He was born in Syracuse, son of the late Peter and Michelina (Buonvecchio) Nami. Tavio was a proud U.S. Army veteran, serving during the Korean Conflict. As a young man, he worked as a butcher at The Willis Ave. Market, which was owned by his parents. Before retiring from the U.S. Post Office as a letter carrier, he also worked as a tile and floor installer for many years. Tavio was a devout Catholic, who enjoyed being with his family and friends. He was a member of the Geddes Veterans, The Solvay Hilltop Club and The Solvay Tyrol Club. In addition to his parents, he is predeceased by his wife, Dorothy (Spagnoletti) Nami in 2016, his son, Stephen Ottavio Nami in 2015, his daughter-in-law, Julia Bovalino in 2010 and his sister, Rose Marotta in 2016. Tavio is survived by his sons, Michael Nami, Nicholas (Donna) Nami, and Thomas Nami (Daryl Bell); his daughter-in-law, Lucy Nami; his grandchildren, Jason (Amanda) Nami, Marisa (A.J.) Hameline, Anthony Nami, and Alexander (Joelene VanZile) Nami; and his great-grandchildren, Alessandra and Julianna VanZile-Nami and Piper and Hayden Hameline. Tavio is also survived by many nieces and nephews. Visitation will be held on Wednesday, July 28, 2021 from 10:30-11:30 am at St. Charles Church 501 South Orchard Rd., Syracuse, with a Funeral Mass in celebration of Tavio’s life to follow at 12:00 pm at St. Charles Church. Interment with Military Honors will take place in Assumption Cemetery. In lieu of flowers, donations may be made to St. Jude Children’s Research Hospital, 501 St. Jude Place, Memphis, TN 38105.

Ottavio P. &#8220;Tavio&#8221; Nami, 92, of Syracuse, passed away July 19, 2021 at Elderwood at Liverpool. He was born in Syracuse, son of the late Peter and Michelina (Buonvecchio) Nami. Tavio was a proud U.S. Army veteran, serving during the... View Obituary & Service Information

The family of Ottavio P. "Tavio" Nami created this Life Tributes page to make it easy to share your memories.

Send flowers to the Nami family.