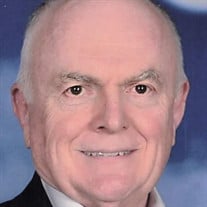 Peter L. “Pete” Bailey, 75, of Cicero, passed away peacefully on Friday, March 4, 2022, at Francis House surrounded by his loving family. He was born in Syracuse to the late Ken and Lelia “Judy” (Dunham) Bailey. Pete was a U.S. Navy Veteran serving as a gunner's mate aboard the USS Leary between 1968-1972. He attended Le Moyne College, Syracuse University, and the FBI National Academy, culminating in a career with the Onondaga County Sheriff’s Office that spanned over 38 years until his retirement as captain. He enjoyed the arts, notably photography and literature, and loved learning about history and traveling with his family. In addition to his parents, Pete is predeceased by his wife, Linda (Metzgar) Bailey. He is survived by his wife, Rose (Esce) Bailey; his children, Lisa (Gary) Sleddens, Michelle (Jon) Nagelvoort, and Richard (Jennifer) Bailey; his step-children, Marc (Kelly) and Kevin (Rosa) Cahl; his grandchildren, Alex and Eric Sleddens, Dylan (Rebecca) Morrisey, Alexzandra and Jon (Dutch) Nagelvoort, Gabriella, Mackenzie, and Nicholas Cahl, and Arianna Bailey; great-grandchildren, Presley and William Morrisey; siblings, Patrick (Cassia) and Kenneth (Johanna) Bailey; along with several nieces, nephews, and cousins. Calling hours will be held from 4 – 7 pm on Wednesday, March 9, 2022, at the THOMAS J. PIRRO JR. FUNERAL HOME, 3401 Vickery Rd. (corner of Buckley Rd.) North Syracuse. Funeral services will take place on Thursday, March 10, 2022 at 9 am at the funeral home followed by a funeral mass in celebration of Pete’s life at 10 am in Sacred Heart Church of Cicero. He will be laid to rest at West Monroe Cemetery in the spring. In lieu of flowers, contributions may be made to Francis House, 108 Michaels Ave. Syracuse, NY 13208.

The family of Peter L. "Pete" Bailey created this Life Tributes page to make it easy to share your memories.