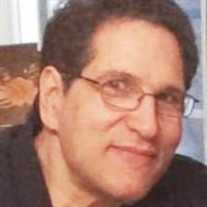 Peter A. Scaffido II, 55, passed away April 20, 2021. Pete was born in Honolulu, Hawaii in 1965 to the late Carmel and Elia (DiNatale) Scaffido. A lifelong resident of CNY, Pete graduated from Liverpool High School in 1983 and attended college for Radio and Television Production. He was a skilled tradesman working in the printing industry in pre-production and as a pressman for over 35 years. Most recently, he served as a Production Coordinator Estimator at Evergreen Manufacturing-East Coast Bindery. Sometimes stoic and quiet but always dependable, Pete had a wicked sense of humor and a great big smile. He loved spending time with his family and friends, but his true passion was music. A devoted fan and follower of the Grateful Dead, Pete enjoyed attending live concerts and more so enjoyed performing. He was an avid drummer, guitarist and vocalist. He was a member of many bands over the years including Vicious Rumours, Seeking Asylum, Zadoc’s Eternal Circus, Fuzzbox, and Wicked Liquid. He was also a popular DJ for events and karaoke. Pete was a talented photographer, carpenter and an avid downhill skier/ski patroller. Pete is survived by his brother, Joe Scaffido of Ithaca, NY; sister, Gina “Gigi” Scaffido of Atlanta, GA; nephew and niece, Alexander and Hannah Scaffido of Ithaca, NY; aunt, Sandy Caloia of Solvay, NY; aunt and uncle, Diane and Luciano Bianco of Liverpool, NY; and several cousins. Visitation will be held on Tuesday, April 27, 2021 from 4 – 5:30 pm, followed by a funeral service in celebration of Pete’s life at 5:30 pm at the THOMAS J. PIRRO JR. FUNERAL HOME, 3401 Vickery Rd. (corner of Buckley Rd.) North Syracuse, NY. In lieu of flowers, please consider a donation to the Carmel and Elia Scaffido Memorial Scholarship (c/o Liverpool Dollars for Scholars), or a charity of your choice.

Peter A. Scaffido II, 55, passed away April 20, 2021. Pete was born in Honolulu, Hawaii in 1965 to the late Carmel and Elia (DiNatale) Scaffido. A lifelong resident of CNY, Pete graduated from Liverpool High School in 1983 and attended college... View Obituary & Service Information

The family of Peter A. Scaffido II created this Life Tributes page to make it easy to share your memories.

Send flowers to the Scaffido family.