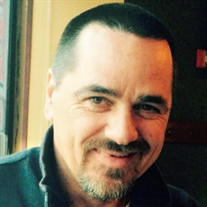 Richard F. Wing, Jr. (Rich), 55, of North Syracuse, NY passed away December 31, 2021 at Crouse Hospital after a courageous, six-month battle with cancer. Rich was the true definition of a loyal partner, son, dad, brother, and friend. He was a “stand-up” guy, and those who knew him feel lucky to have had his light, love, and selflessness in their lives. As an organ donor, Rich gave the gift of his eyes to help a stranger in need. Rich was an avid hunter and outdoorsman, motorcycle enthusiast, and was a true man’s man. Originally from Cortland, NY, he was a member of the Sons of Sam Motorcycle Club – Cortland Chapter, where he gained many brothers who shared his passion for riding. Rich worked as a Service Technician on industrial equipment for over 25 years, most recently for Mullen Industrial Handling Corporation, which had been so supportive throughout Rich’s illness. Rich is predeceased by his father Richard F. Wing, brother Tim Wing, and son Jeff Wing. He is survived by his life partner, Nichole Mondo Bucci, who completely and wholeheartedly adored him. He also is survived by his mother Anne (Bush) Wing, brothers John (Debbie) Wing, Pat (Becky) Wing, sister Laura Ferris, sons Adam (Annalise) Wing, Justin Wing, and adopted daughter Ashley Wing, along with several nieces, nephews, grandchildren, and great grandchildren. The family would like to thank all the staff at Crouse Hospital and Hematology Oncology Associates of CNY for the care they gave Rich. A celebration of life will take place during his birthday month, in June (TBD), when all his family, friends, and brothers will be able to gather to honor him.

Richard F. Wing, Jr. (Rich), 55, of North Syracuse, NY passed away December 31, 2021 at Crouse Hospital after a courageous, six-month battle with cancer. Rich was the true definition of a loyal partner, son, dad, brother, and friend. He was... View Obituary & Service Information

The family of Richard F. Wing, Jr. created this Life Tributes page to make it easy to share your memories.