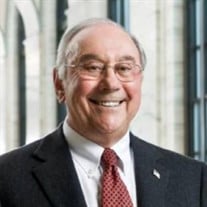 Robert J. Congel, the Founder and Chairman of the Pyramid Companies, passed away peacefully at home on February 3rd surrounded by family. He was 85 years old. A lifelong resident of Central New York, Bob was a third generation Italian American and entrepreneur at heart. He proudly attended Christian Brothers Academy graduating in 1954. After receiving his education from Fordham University, Bob returned to Syracuse and launched R.J. Congel Construction Company in 1958 with a $175 loan from his grandfather Antonio Mondo. After succeeding in the construction industry, Bob applied his talent into real estate, developing apartments, offices, warehouses, and small retail centers. In 1970, Bob founded The Pyramid Companies. Under Bob’s leadership, The Pyramid Companies has been recognized as an industry leader on multiple fronts. Pyramid created nearly 26 million square feet of commercial space across New York State and Massachusetts. Wanting to give back to the hometown he felt gave him so much, Bob’s vision and creativity was instrumental in removing “oil city” from Syracuse’s Lakefront, in advancing the redevelopment of Franklin Square, and in developing Destiny USA the 6th largest complex of its kind in the United States. While Bob was exceptionally driven in his professional career, family was always his number one priority and source of pride. Married for nearly 60 years, Bob and his wife Suzanne have five children and twenty-one grandchildren. He is survived by his wife Suzanne, children Beth (Doug) Ulrich, Scott (Emily) Congel, Mark (Meaghan) Congel, Sheila (Eric) Goetzmann, Stephen (Alexandra) Congel, sister Elizabeth (Bob), nephew Joe (Diana) Goethe, all of his grandchildren and countless friends and business associates. Bob was deeply patriotic and always appreciated the opportunities America provided. Bob was proud to be a husband, father, Gabba, brother, uncle, friend, and mentor. Bob loved the outdoors spending summers at Skaneateles Lake, and skiing each winter with his children and grandchildren. Bob often used the saying ‘Life is People’ meaning human relationships are the most important part of your daily life. Throughout his career, Bob served on the boards of a number of civic and business organizations including: Lifetime Trustee at Syracuse University, Christian Brothers Academy, the Metropolitan Development Association, the Greater Syracuse Chamber of Commerce, as well as Fays Drug Company, Unity Mutual Life Insurance Company. Bob has been recognized for his commitment to the environment and community: Environmental Quality Award from the Environmental Protection Agency (EPA), Greening USA, the US Green Building Council, the American Cancer Society, the Longhouse Council’s Distinguished Citizen of the Year Honoree, the Onondaga Historical Association Medal, and the Rhea Eckel Clark Memorial Citizenship Award from the Central New York Regional Planning and Development Board. Bob’s family would like to send a special thank you to the wonderful aides from Peregrine, as well as the caring individuals at Hospice of CNY. A private Mass of Christian Burial and entombment will be held. Funeral arrangements entrusted to THOMAS J. PIRRO JR. FUNERAL HOME. In lieu of flowers, donations may be made to the Alzheimer’s Association of Central New York.

Robert J. Congel, the Founder and Chairman of the Pyramid Companies, passed away peacefully at home on February 3rd surrounded by family. He was 85 years old. A lifelong resident of Central New York, Bob was a third generation Italian American... View Obituary & Service Information

The family of Robert J. Congel created this Life Tributes page to make it easy to share your memories.

Robert J. Congel, the Founder and Chairman of the Pyramid Companies,...