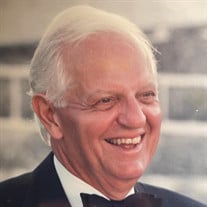 Robert Louis Errico died peacefully at his home in New York City on February 25, 2022, after a courageous battle with prostate cancer. He was 86 years old. Bob was born on November 6, 1935, in Syracuse, New York to Josephine and Emilio Errico. He attended Valley Academy High School where he was a standout in football and baseball. Bob graduated from Le Moyne College in 1957, where he met the love of his life Nicolena Rose Scirto. The two were married in Lockport, New York in 1960 and would begin building a family with four children. From his humble beginnings driving a cement truck in Syracuse, Bob worked his way to an executive in the concrete jungle of New York City. Bob’s professional career began in 1962 as a broker at Bache & Company in Syracuse. After serving in the Air Force during the Berlin Crisis, Bob returned to Bache to become the head of the Syracuse office. At age 25, his focus and ambition drove him to become the second youngest manager in the company’s history. Bob’s success brought him to Bache’s New York City office after a quick stop in Buffalo. In 1973, Bob, his wife Nicolena, and their four children settled in Ridgewood, New Jersey to begin the next chapter of their life. In New York, Bob rose to run all Bache offices in the eastern half of the United States. When Bache merged with Prudential to form Prudential-Bache, he was appointed head of marketing and became a member of the firm’s Board of Directors. Bob joined Alliance Capital in 1987 where he became President of the Alliance Fund Distributors Inc. Following a successful 40 years on the institutional side, Bob brought his talents to Locust Wood Capital as a Special Advisor in charge of business development and was instrumental in growing the firms’ assets exponentially. He truly loved his work and the community of people that came with it. Many of his business relationships seamlessly evolved into lifelong friendships. Bob always remained close to his roots and became a staple of the community in Skaneateles, New York. He continued to give back to Le Moyne College as a member of the Board of Trustees and often returned as a guest lecturer at the Madden School of Business. In 2015, Bob and his wife, Nicolena, were honored with the Distinguished Service Award for their leadership and commitment to Le Moyne College. In his later years, Bob spent the winters in Lost Tree Village where he reconnected with old friends from different stages of his life and established new ones. He enjoyed being involved with the Lost Tree Foundation and especially loved when his children and grandchildren came to visit. Bob cherished his family above all, and nothing would bring a smile to his face like a dinner table surrounded by his loved ones. Bob was known for his kindness, generosity, and quick wit. Nicolena was always by his side and the two were an inseparable pair. He approached a round of golf with the same gentle intensity that he brought to the boardroom, and he celebrated the success of others as his own. Bob radiated a wonderful outlook on life which shined through every conversation or word of advice, and his innate ability to listen drew people towards him. His greatest lessons were found in the way that he lived – by respecting each person, lending a helping hand, and unwavering commitment to his family. Whether it was his oldest business partner or one-time waiter, he took an interest in every person he met, and they never forgot him for it. Bob is survived by his wife, Nicolena, his four children and their spouses – Marie and her husband John Bicks, Stephen and his wife Jennifer, Elizabeth and her husband Robert Sloan, and Christopher and his wife Lisa – as well as his 15 grandchildren. Bob is also survived by his sister, Betty Casciano. There will be a private funeral in Skaneateles, New York, followed by a memorial celebration in New York City in the spring. In lieu of flowers, the family asks that donations be made to the Errico Endowed Family Scholarship Fund at Le Moyne College which supports students with financial need from the New York City area. Donations in Bob’s memory can be made online at www.lemoyne.edu/give or directly to Le Moyne College Office of Advancement, P.O. Box 527, 1419 Salt Springs Road, Syracuse, NY 13214.

Robert Louis Errico died peacefully at his home in New York City on February 25, 2022, after a courageous battle with prostate cancer. He was 86 years old. Bob was born on November 6, 1935, in Syracuse, New York to Josephine and Emilio Errico.... View Obituary & Service Information