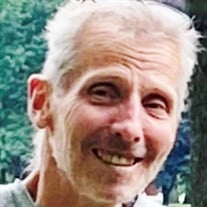 Robert Leroy Nape passed away in Upstate New York on January 2, 2021. Bob was born on June 25, 1951 in Scranton, Pa. where he first developed his lifelong love for basketball. This love for the sport led him from being a star on the court at Scranton Preparatory School to being one of the organizers of the Scranton summer league to his college career at Hartwick College in Oneonta, NY. Bob’s love for the sport and desire to instill this in others motivated him to volunteer as a youth basketball coach in Ithaca, NY where he lived at the time of his death and where he continued to love playing pickup ball with a group of men who play well into their seventies. Bob was devoted to and is survived by his mom, Patricia Nape and his siblings, Mary Ann (Edward) Pietrowski, Patricia (Jerry) Jennings, Madelyn Pfleckl and his close companion, Elizabeth Salon and her daughter, Kristen Steele. Bob is predeceased by his dad, Robert Leo Nape and his sister, Nancy (Kevin Lavelle). Bob loved a good adventure, whether it be hitchhiking all over Europe or riding his ten-speed bike from the Atlantic to the Pacific Ocean with a close friend. Passionate about the environment, Bob moved to Philadelphia, Pa. and became an advocate for alternative energy starting his own business, Solar is Hot, installing systems for hot water heating and swimming pools. During his eighteen years in Philadelphia, Bob helped to organize and ran the Philadelphia Junior Solar Sprints, a competitive solar car contest for junior high school students. While in Philadelphia he developed a love for Ultimate Frisbee, a game that he played with PADA (Philadelphia Area Disc Alliance). In his honor the Spirit of the Game Award is given each year exemplifying Bob's belief that the joy of playing the game and the treatment of one’s opponent should not be sacrificed for the sake of competitiveness. Due to health reasons, in 2002, Bob moved to Ithaca, NY. Seeking a less stressful lifestyle he wanted to live where he could look up and see all the stars in the nighttime sky. He hiked in the woods, swam in the falls, biked around town, and sailed on the lake. In Ithaca, he continued to spread the word of alternative energy through Solar is Hot. Bob was a peace activist willing to march for human right's issues including participation in the bus caravan for humanitarian aid to Cuba. Bob loved music, teaching himself how to play the guitar, the piano and singing with an adult group in Ithaca. Bob will be missed by his many nieces and nephews who will always remember him for the sing-alongs, the roundabout ping-pong games, the water balloon tosses and the basketball games. Bob was passionate about basketball, ultimate frisbee, nature, solar, the environment, and music but his greatest love was his love for people. He connected and engaged with everyone he met in a genuine caring and empathetic way. He was a great listener who excelled at drawing others out and sharing his compassion and wisdom. His generosity and kindness touched many lives. His was a life well lived. Contributions in Bob's memory may be made to Loaves and Fishes of Tompkins County, Ithaca, NY. A celebration of Bob's life will be held on Saturday, June 26, 2021 at 2 pm at Amazing Grace Bed & Breakfast 136 Hunt Hill Rd., Ithaca, NY.

Robert Leroy Nape passed away in Upstate New York on January 2, 2021. Bob was born on June 25, 1951 in Scranton, Pa. where he first developed his lifelong love for basketball. This love for the sport led him from being a star on the court at... View Obituary & Service Information

The family of Robert Leroy Nape created this Life Tributes page to make it easy to share your memories.

Send flowers to the Nape family.