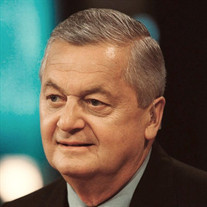 Roderic Woodruff Groat, also known as Rod Wood, and to close friends as &#8220;Roddy&#8221;, proudly of Syracuse, was called home to the Lord on Sunday, December 12th, one day after his 81st birthday, and after a short, but courageous battle... View Obituary & Service Information

The family of Roderic W. Groat "Rod Wood" created this Life Tributes page to make it easy to share your memories.

Send flowers to the Groat family.