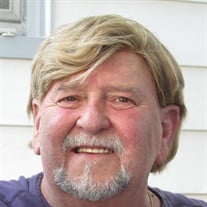 Samuel D. Rozzano, 75, of Liverpool, passed away October 12, 2021 at Crouse Hospital. He was born in Syracuse, son of the late Sam F. and Betty (Cole) Rozzano. Sam retired from New Process Gear after 31 years. He enjoyed traveling and playing... View Obituary & Service Information

The family of Samuel D. Rozzano created this Life Tributes page to make it easy to share your memories.

Send flowers to the Rozzano family.