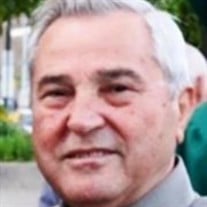 Slavejko (Sam) Aleksovski, 86 years young, suddenly passed away Saturday, October 17, 2020 at Crouse Hospital surrounded by his loving family. Sam was born December 19, 1933 in Sveti Nikola, Macedonia to Riste and Petra. Sam also had a brother Boce, and a sister Milka who are predeceased. Sam was raised and schooled in Sveti Nikola and received his technical degree as a machinist and served in the Yugoslavian Military in the tank infantry. In 1959, he met his wife Luba (Yankulovich) during her visit to Macedonia and instantly found his true love. After a civil ceremony, he emigrated from Macedonia to Syracuse, New York. On June 21, 1960 at St. Mary’s Macedonian Church, Sam and Luba, along with her sister Menka and her husband Petar, celebrated with a double wedding. Sam and Luba were blessed with two children, Bill and Elena. Sam joined his father-in- law’s business and became a partner along with his two brother-in-law’s Alex (Milica) Dudevski and Petar (Menka) Ristevski at Liberty Market (E. Genesee St.). He became a trained butcher and assisted in the overall business operations. In January 1985, they expanded the business and opened Liberty Deli (Irving Ave.). Sam loved his customers and always enjoyed the daily camaraderie and forming long term relationships. In 2002, Sam retired from Liberty Deli. As a communicant of St. George Macedonian Eastern Orthodox Church, Sam was one of the founding members. He played an active role as a member and served his term on the running committee. Sam was a disciplined, hardworking, and devoted family man wanting nothing more than to provide for his family. He was the epitome of the American dream. His love for his family and friends was paramount. He loved to tell his kids and grandkids fascinating stories of his past experiences and teach them many life lessons and traditions. According to Sam, his way was the only “right” way (more often than not, he was right!). He had a passion for making the best homemade wine, sausage and hot pepper spread (Ivar). He took pride in maintaining a well-manicured yard, pristine home, dancing and singing in the traditional Macedonian style. Sam’s life was totally dedicated to his family and he loved nothing more than spending time with them. His fondest memories were created celebrating holidays at home, life celebrations, time on Skaneateles Lake, time in Austin, Texas and Delray Beach with family and vacations in Ocean City, New Jersey. He was larger than life and will be remembered by his infectious laugh. Sam is survived by his wife Luba; son, Bill (Joyce) Aleksovski; daughter, Elena (Michael) Romano; grandchildren: Nick and Danny (Sarah) Aleksovski, Jonathan Romano and fiancée Amanda Bingham, Nicole (Jack) Harmatuk and Carly Romano; and his great-grandchildren: Duke and Maxwell Harmatuk. Public calling hours will be held on Thursday, October 22, 2020 at Thomas J. Pirro Jr. Funeral Home (Buckley and Vickery Rd) from 3 to 7 p.m. Private funeral and burial services will be held on Friday. In lieu of flowers, contributions can be made to St. George Macedonian Church.

The family of Slavejko (Sam) Aleksovski created this Life Tributes page to make it easy to share your memories.

Send flowers to the Aleksovski family.