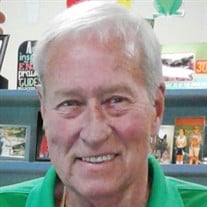 Stanley A. Gardinski, 78, of Liverpool, NY passed away peacefully on Saturday, February 19, 2022, with his family by his side. Born in Toowoomba, Australia, Stanley came to the United States at the age of 3. He graduated from Vocational High School in 1961, where on the basketball team he was known as “The Kangaroo”. He was an avid lover of all things sports and played basketball for many years. He led the All-Parochial League in points from 1959-1961. He also was named to and played for the All City All Stars team where he was the lead scorer. He was referred to as “The floor general who ran the ball club”. Stanley worked at Camp Zerbe as a Camp Counselor for many years. He loved being outdoors and staying active. Stanley worked for Niagara Mohawk in the Gas Planning department for 39 years where he was a Union Steward. He knew everything there is to know about gas and loved his job. He retired from NiMo in 2005. He is predeceased by his father, Stanley Sr. and his mother, Jean (Wright) Gardinski. Stanley is survived by his loving wife of 40 years, Christine (Butler) Gardinski, his pride and joy, daughter, Gina Rojas, the love of his life, his granddaughter Gianna, and several cousins, aunts and uncles. He was an incredibly dedicated father and husband, always putting his family first. Stanley loved to travel. He specifically loved spending time in Cancun, MX with his family and friends. He loved the beach, the food, and the wonderful people he has met over the years. These were some of his happiest memories. He was an avid gardener and carefully and meticulously tended to his fruits and vegetables. He also loved a good card game and his morning coffee with his good friends Mike and John. The last 10 years were easily his happiest because he adored his granddaughter Gianna with every bit of his heart. Stanley was truly an amazing person with an incredible heart. He saw the good in everyone. There wasn’t a stranger that he didn’t know. He always had a warming and welcoming smile on his face and joke on his lips. He was the first to give you the shirt off his back, or the last $20 in his pocket. His kindness was felt by many and will be missed by all. Family and friends may call on Friday, March 4, 2022, from 4:00 – 6:00 pm, immediately followed by a funeral service in celebration of Stanley’s life at 6pm at the THOMAS J. PIRRO JR. FUNERAL HOME, 3401 Vickery Rd. (corner of Buckley Rd.) North Syracuse, NY. In lieu of flowers, contributions in Stanley’s memory may be made to Gianna Rojas in order to set up a college fund for Stanley’s granddaughter, Gianna.

Stanley A. Gardinski, 78, of Liverpool, NY passed away peacefully on Saturday, February 19, 2022, with his family by his side. Born in Toowoomba, Australia, Stanley came to the United States at the age of 3. He graduated from Vocational High... View Obituary & Service Information

The family of Stanley A. Gardinski created this Life Tributes page to make it easy to share your memories.

Stanley A. Gardinski, 78, of Liverpool, NY passed away peacefully...

Send flowers to the Gardinski family.