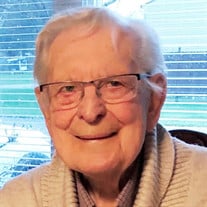 Jerry passed away on December 20, 2021 following a brief illness surrounded by his family. He was born April 11, 1931 in Archbald, PA to Stephen and Helen (Glowacki) Vislosky. Jerry was drafted by the Philadelphia Phillies organization as a left-handed pitcher right out of high school. He played for 2 years before being drafted into the Army. Jerry was one of the first members assigned to the National Security Agency as a cryptographer where his journeys around the world began. His classified diplomatic duties saw him stationed in Asmara, Ethiopia where he transmitted the firsthand accounts of the fall of Dien Bien Phu on the Vietnamese border back to Arlington Hall in the United States. In his official capacity, Jerry was an invited guest to dine with Saudi King Ibn Saud and King Haile Selassie I of Ethiopia. He traveled to Moscow, Australia, Egypt, India, Thailand and Vietnam. Jerry provided diplomatic security to then Secretary of State John Foster Dulles during the Southeast Asia Treaty Organization Conference in 1954. Following his Honorable discharge from the Army, Jerry attended Penn State University and graduated from Syracuse University with a degree in accounting. He worked for the 5th judicial district of New York State before becoming Deputy Comptroller for Onondaga County where he worked for 28 years. Jerry was a founding member and President of the New York State Government Finance Officers’ Association and saw the organization grow from ten to the thousands of members it has today. After retirement, he was appointed as the comptroller for the Town of Salina where he enjoyed his work for several years. Jerry was a member of Our Lady of Pompei/St. Peter’s Holy Name and a member of the golf league for many years. Jerry and his wife were a team who loved to travel and take adventures- both planned and spontaneous. He was the head of a very large family and loved big Italian dinners, SU sports and getting lost snorkeling in the Caribbean. He was a great man who valued decency in life, a good book, holding hands with his wife and a good joke. Jerry was a master at the game Balderdash. He was loved and will be greatly missed. Jerry was predeceased by his parents and his sister, Pati Maddage. Jerry was a loving husband, father, stepfather and grandfather. He is survived by his loving wife of 29 years, Anne (Ilacqua-Snyder); his children, Mark (Suzanne) Vislosky, Terry (Steven) Spalding and Brian (Colleen) Vislosky; step-children, Jennifer (Lee) Robinson, Dennis (Allyn-Lee) Snyder and Mary (David) Wassel; Grampa to Ryan, Emily, Ethan, Brady and Eamonn Vislosky, Griffin and Aidan Spalding; Dzadzie to Domenica (Glenn) Runyan, Genevieve and Evelyn Costigan, Peter and Ellen Snyder, David (Rebecca) Wassel, Alex Wassel, Mariah (Jeff) Fisher; great-grandchildren, Ryker James Runyan and David Wassel III; step-sister, Harriette (Robert) Ricchetti; honorary daughter, Michelle Cupoli; several nieces, nephews and their beloved puppy Sophia. A Mass of Christian Burial will be celebrated on Wednesday, December 29, 2021 at 10 a.m. in Our Lady of Pompei/St. Peter’s Church, 301 Ash Street in Syracuse. Family and friends may call on Tuesday, December 28, 2021 from 5 to 7 p.m. at the THOMAS J. PIRRO JR. FUNERAL HOME, 3401 Vickery Road (corner of Buckley Road) in North Syracuse. In lieu of flowers please consider a donation to the Honor Flight Network (www.honorflight.org) in Jerry’s memory.

Jerry passed away on December 20, 2021 following a brief illness surrounded by his family. He was born April 11, 1931 in Archbald, PA to Stephen and Helen (Glowacki) Vislosky. Jerry was drafted by the Philadelphia Phillies organization as a... View Obituary & Service Information

The family of Stephen G. "Jerry" Vislosky created this Life Tributes page to make it easy to share your memories.

Jerry passed away on December 20, 2021 following a brief illness...

Send flowers to the Vislosky family.