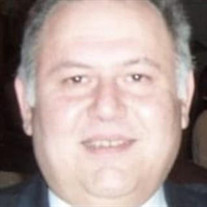 Vasko Sekovski, 63, of Liverpool, passed away May 16, 2021 at St. Joseph’s Hospital. He was born in Bitola, Macedonia in 1957 and immigrated to the U.S. in 1970. Vasko worked alongside his brother-in-law, Riste at V&R Tool and Die for over 30 dedicated years; most recently, he was employed at Dependable Tool. A hard worker, he enjoyed keeping busy, always providing for his family. He was the family’s go to handyman, classic rock DJ, chef, political analyst, coffee afficionado, TV critic, devoted church member and most beloved family man. Vasko is survived by his loving wife of 34 years, Cveta (Temelkovska) Sekovski; his daughter, Sonya Sekovski; his son, Tom Sekovski; his parents, Trajan and Menka (Mitrevska) Sekovski; a sister, Violeta Razmovski, along with several nieces, nephews, and cousins. He is predeceased by his brother-in-law, Riste Razmovski. Calling hours will be held from 4:30 – 6:30 p.m. on Thursday, May 20, 2021 at St. George Macedonian Eastern Orthodox Church, 5083 Onondaga Rd., Syracuse, N.Y., followed by a Trisagion Prayer service at 6:30 p.m. A Funeral service in celebration of Vasko’s life will be conducted on Friday, May 21, 2021 at 10 a.m. at St. George Macedonian Eastern Orthodox Church, with burial to follow at Woodlawn Cemetery in Syracuse. Funeral arrangements entrusted to THOMAS J. PIRRO JR. FUNERAL HOME. In lieu of flowers, donations may be made to St. George Macedonian Eastern Orthodox Church.

The family of Vasko Sekovski created this Life Tributes page to make it easy to share your memories.

Send flowers to the Sekovski family.